A Broken Family Picks Up the Pieces 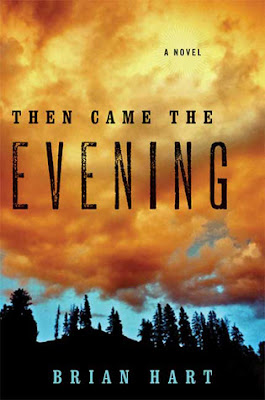 Then Came the Evening
by Brian Hart
Published by Bloomsbury USA

Despite not being the focal point of the narrative, all of the events in Brian Hart's Then Came the Evening can be traced back to one defining moment: Bandy Dorner enlisted for Vietnam. We never know what Bandy experienced during his tour of duty because the novel begins after his return home, but we know it had a profound effect. He returns a changed man and, after learning that his home has burnt down and believing his young wife, Iona, to have been inside, a drunk, grief-stricken Bandy turns to the familiarity of violence, shooting and killing the officer trying to subdue him. Little does Bandy know that his pain will only beget pain as his wife, Iona, has left him for another man but is pregnant with Bandy's child--a child who will later be marked and judged by his father's actions.

Now before you chastise me for spoilers, all of this happens in the first few pages of the novel. Then Came the Evening picks up nearly two decades later, as Bandy's son, Tracy, decides to reconnect with the father who never knew of his existence. Bandy's release from prison is imminent and, hoping to mend the shattered family, Tracy sets about reclaiming the abandoned family ranch, restoring the gutted house in anticipation of Bandy's return home. As his wayward parents are drawn back to the hometown and the past they left behind, Tracy, Iona, and Bandy tentatively attempt to recapture a sense of family despite old wounds and fresh betrayals, learning the futility of trying to recapture what never was.

Then Came the Evening is about people who are broken beyond repair, who have been shaped by proximity to violence and live in a world with sharp teeth. The narrative moves at a slow, unhurried pace and may frustrate readers who crave more external action, but I enjoyed Hart's refusal to rush a story that should unfold for us as it unfolds for the characters. There shouldn't be a race to the finish line here as Hart is writing about life as it is lived, exploring how people are marked by choices made in mundane circumstances. I also enjoyed lingering over the novel's brutally poetic descriptions of the physical landscape that reflects and explores the internal landscape of the characters--especially in the case of Iona and Bandy as they struggle to reconnect with a time and a place and a version of themselves that was, but is no more. These are not characters who are keenly in touch with their emotions, for whom words come easily. Told in vignettes adrift in time and from varying perspectives, the novel allows the stories of each character to jostle against the other like pieces of a puzzle trying to find a way of fitting together.

While Hart does a fine job of depicting the depths to which Iona has sunk after Tracy initially leaves her to find Bandy, it's his portrayal of Bandy that is the real genius of the novel. A man who has been in prison for the last 20 years, Bandy's return home is painful and raw as Bandy's fear and disorientation are palpable. While his crime was admittedly a heinous one, there's also a realization that this Bandy Dorner is not the same one who pulled the trigger years ago. There's something heartbreaking about his cautious hope that maybe something can still be salvaged from the wreck he made of his family; he knows he doesn't deserve it, but it doesn't stop him from wanting it. However, the novel is not interested in making a case for justifying the circumstances of the crime (as Bandy's mother says, "Everybody blames the war for everything. I'm sick of it" [13]), but more interested in making a case for Bandy as a human being--one still capable of brutality, but one who has not forgotten how to feel.

While the characters in Hart's novel aren't necessarily likable, I admire how they try--with varying levels of success--to make something better of themselves and of each other. While the reader knows the odds are against these shattered people being able to mend one another, there's an inherent nobility in the attempt.
Posted by Amanda at 8:50 AM