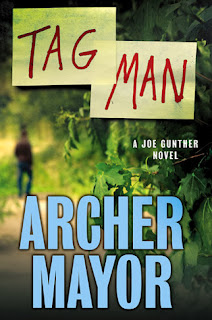 
It's always fun to return to Vermont for a visit with Joe Gunther, the head of the Vermont Bureau of Investigation, and the rest of the cast that populates this long-running series. With the twenty-fourth volume in the series just appearing, this remains one of the best regional mystery series going.

As this book opens, Gunther is on personal leave, checking in occasionally with the rest of his team while he struggles to recover from a significant emotional blow that he suffered at the end of the preceding book. Joe is not a young man any more and through the years he's had more than his share of heartache. This latest tragedy has hit him particularly hard.

While he recovers, the city of Brattleboro is intrigued by the antics of a cat burglar who becomes known as the Tag Man. Adept at breaking and entering and at defeating the most sophisticated security systems, the Tag Man enters the homes of wealthy people and skillfully picks through their possessions, in the process deconstructing their lives for his own amusement. He apparently never takes anything of value, although at each stop he eats something out of the refrigerator. His calling card is a simple post-it note with the word "TAG" which he leaves at each scene.

To the press and to many other observers, it seems like simple fun and games. But it's not so funny to the people whose privacy is violated or to the authorities who are attempting without much success to put an end to that Tag Man's escapades. But then the Tag Man breaks into the home of a guy who rubs him the wrong way, and in this case he does walk away with something of great value to a very nasty man. Then, on his next outing, the Tag Man discovers something even more alarming, and suddenly his seemingly harmless hobby is no longer fun and games.

The Tag Man now has some very dangerous people after him, including the agents of the VBI. As the case heats up, Joe Gunther gradually emerges from his shell and ultimately takes the lead in the investigation. What follows is a dangerous game of cat and mouse that puts any number of people at risk, and as always, Archer Mayor spins a very engrossing tale. Readers who have not yet discovered this series would be well-advised to start with the earlier books, but old fans of the series will welcome this addition.
Posted by James L. Thane at 9:54 AM