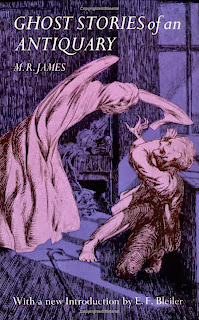 Ghost Stories of an Antiquary

This volume contains eight tasty little nuggets of supernatural horror that I found very satisfying. In each of them the story is told second or even third hand by a genial narrator whose acquaintances, who are themselves of a decidedly scholarly bent, have been the victims of supernatural intrusion into our world. Often the stories revolve around an ancient artifact able to invoke the otherworldly that is discovered by these particularly luckless individuals (though they often feel themselves lucky indeed when they first make their discoveries). The tales are all good, but my favourites were “Canon Alberic's Scrap-book”, “Lost Hearts”, “”The Mezzotint”, and “Count Magnus”. I found myself thinking of both Lovecraft (in James’ use of made-up manuscripts and a reliance on protagonists of a learned bent whose curiosity proves to be their bane) and Clark Ashton-Smith (though with prose that was a little less flowery) though I think James is a much better stylist than the former and a little less given to the more extreme flights of fancy of the latter.

“Canon Alberic's Scrap-book” – An antiquary discovers a scrap-book of ancient manuscripts compiled by the titular Canon Alberic in the 17th century that is in the keeping of the sacristan of a church in France that he is studying. One picture, “The dispute of Solomon with a demon of the night”, proves to be particularly compelling…and why is the sacristan so eager to get rid of a book so obviously of great value? Great evocation of mood and the way in which the supernatural creature manifests itself was suitably creepy.

"Lost Hearts" – A rather moving tale of revenge from beyond the grave and the perils of devoting oneself to the arcane teachings of the ancients in the hopes of gaining eternal life. I knew where this one was going pretty much after the first paragraph, but I heartily enjoyed the ride.

"The Mezzotint" – I really liked the interesting way in which the artifact in question here, the mezzotint of the title, manifested the supernatural and the foreboding sense of a quiet yet unstoppable horror that was the result.

"The Ash-tree" – A nobleman and his descendants find that being the star witness in a witch trial probably isn’t a good idea. Good creepy/gross factor with the creatures invoked for vengeance.

"Number 13" – What happens when you book a room in an inn that used to belong to a man accused of having been an alchemist and magician several generations ago? Nothing good, especially if you rent the room right next to the one in which he mysteriously died. Space and time have a funny way of bending and twisting when the undead get involved.

"Count Magnus" – The titular Count reminded me a bit of Vigo the Carpathian from Ghost Busters 2: he was a mean-spirited son of a bitch who liked to torture people in his spare time and go on fun little trips with names like “the Black Pilgrimage”.  Perhaps it’s wisest if you’re a travel writer getting good copy from his native village to leave the crypt where he’s entombed alone. Just sayin’.

"'Oh, Whistle, and I'll Come to You, My Lad'" – Ah skeptics…they always learn their lesson in the end, don’t they? Well, they do in these kind of stories anyway. If you’re kind of a priggish and pedantic professor going on a holiday to sharpen up your golf game (golf is a re-occurring motif in these stories and I don’t think James was a fan) don’t promise to do some investigating of the local Templar preceptory for a colleague, and if you do for God’s sake don’t muck around with anything you find there. If you’re lucky you’ll run into an old military type who doesn’t trust papists.

"The Treasure of Abbot Thomas" – When the Abbot of a 16th century monastery basically dares you, though the enciphered clues he left behind in some striking stained glass windows, to uncover his hidden treasure don’t do it. Trust me on this.

I like the way in which James gives us enough of a glimpse at the ghosts and undead horrors he unleashes in his stories to avoid Lovecraft’s almost laughable (to me at least) approach of “oh, it was so horrible I can’t even begin to describe it, just trust me it was really, really, really, mind-crushingly horrible!” and yet was sufficiently vague to leave enough of the horror to the imagination of the reader. The charming, almost homely, voice of the narrator was also a nice contrast to the ultimate invocation of otherworldly menace in the tales. All in all a really solid collection of old-school ghost stories that may not leave you cringing in terror, but you may end up looking over your shoulder from time to time. And you’ll definitely take greater care the next time that weird old manuscript seems to fortuitously land in your lap.