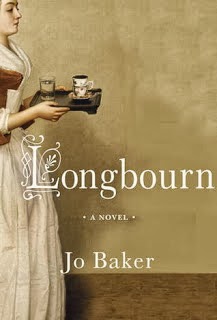 It's become a cliche to love Jane Austen's books. Her oeuvre is so popular that it has inspired a vast amount of fan fiction, much of it crap. I've been a Janeite for about 15 years and have read all of Miss Austen's works (excepting her Juvenilia, which I'm saving for a rainy day). I've also picked up dozens of the fan novels in an effort to extend the stay in her world. I say "picked up" rather than read, because a great deal of the fanfic is insufferable and must be tossed after the first chapter.**

"Longbourn" is one of the exceptions. The simple description is that it is a retelling of "Pride and Prejudice" from the servants' point of view. But it goes deeper than just a retelling -- Longbourn made the Bennet home come alive. For the first time in all of my readings of P&P, I felt as if I lived in the same house as Miss Elizabeth, Jane, Kitty, Lydia, Mary and Mr. and Mrs. Bennet. I know what time the housemaids got up to light the fires and draw the water. I know when the cook began preparing the dinner. I know how the linens got washed, and how muddy it was to walk to Meryton to get supplies. I even know a few secrets about the housekeeper that would have surprised Miss Austen.

And this is where the two novels diverge -- Jo Baker has created full characters out of the servants, who are almost invisible in P&P. The story is mostly told by Sarah, a housemaid who has been working at Longbourn since she was orphaned at age 6. The cook, Mrs. Hill, thinks of Sarah as family, and is worried what will happen to the staff if the estate is entailed away to Mr. Collins. I liked having the servant's perspective on this well-known plot line -- it was a good reminder of how many people were actually affected by Mr. Bennet's lack of a male heir.

The story picks up quickly when a new footman named James Smith is hired. Sarah thinks James has a secret and is determined to find out about his past. Meanwhile, her head is turned by a handsome servant who works for Mr. Bingley. Sarah, who reminded me a bit of the headstrong Jane Eyre, thinks that life should be something more than just emptying chamber pots every day and always washing other people's linens. If only someone would take notice of Sarah...

I should warn diehard P&P fans that if you're hoping to spend more time swooning over Mr. Darcy, you will be disappointed. Aside from Mr. Wickham, who likes to lurk around the servants and tries to seduce a young maid, the men from P&P are only on the periphery of this story. You'll see more of the Bennets as the servants interact with them, but the "downstairs" plot takes its own path.

Baker's prose is lovely, and I was enchanted with almost all of the book. My one criticism was that too much time was spent on James' back story, and I was anxious to return to Longbourn. But that is a mere quibble in an otherwise wonderful novel. Three cheers for Jo Baker for bringing the Bennet home to life!

**In addition to "Longbourn," my recommendations for the best Jane Austen fanfic are Pamela Aidan's "An Assembly Such as This" (part I of a trilogy), "Jane Fairfax" by Joan Aiken, and Amanda Grange's series of gentlemen's diaries, such as "Mr. Darcy's Diary," "Mr. Knightley's Diary," "Colonel Brandon's Diary," etc. I declare them charming and delightful reads.
Posted by DianeLibrarian at 8:00 AM