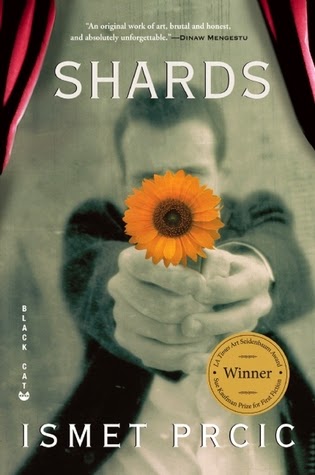 Ismet Prcic
Grove Press
Reviewed by: Nancy
3 out of 5 stars


Ismet Prcic’s brilliant, provocative, and propulsory energetic debut is about a young Bosnian, also named Ismet Prcic, who has fled his war-torn homeland and is now struggling to reconcile his past with his present life in California.

He is advised that in order to make peace with the corrosive guilt he harbors over leaving behind his family behind, he must “write everything.” The result is a great rattlebag of memories, confessions, and fictions: sweetly humorous recollections of Ismet’s childhood in Tuzla appear alongside anguished letters to his mother about the challenges of life in this new world. As Ismet’s foothold in the present falls away, his writings are further complicated by stories from the point of view of another young man— real or imagined— named Mustafa, who joined a troop of elite soldiers and stayed in Bosnia to fight. When Mustafa’s story begins to overshadow Ismet’s new-world identity, the reader is charged with piecing together the fragments of a life that has become eerily unrecognizable, even to the one living it.

Shards is a thrilling read, a harrowing war story, a stunningly inventive coming of age, and a heartbreaking saga of a splintered family.

I enjoy gripping, personal stories about surviving hardship during war, the mundane details of life that go on despite such major upheaval, and fitting in and finding one’s identity in a foreign land.
This fragmented tale is told from multiple perspectives, that of Ismet while he is living in California, Ismet growing up in war-torn Bosnia, and another Bosnian teenager named Mustafa whose experiences fuse with Ismet’s so strongly that it is difficult to tell what is real and what is imaginary. It is brilliant, unsettling, funny, and beautiful. It is also somewhat lacking in focus and felt too long in places.
There were gorgeous, moving passages like this one:

"It was like we were driven to put that frame in front of us. To make a difference on those people’s faces, you know. Something. We let it sit in our laps, held it erect, and ceased all movement. We became a painting, staring out through the frame into the real world. And soon the real people stopped to stare at us, the painting, forgetting for a moment about the war, the oppressive psychosis that permeated everything. People have to look at art no matter what.

A bunch of children swarmed around us trying to catch a facial twitch and laughed giddily, waved their little hands in front of our eyes, and scratched their little heads when we wouldn’t think. Adults mostly stared from a distance, wondering why anybody would do this. Two elderly men with their hands behind their backs looked at us with brutal disgust, shaking their heads like the end of the world was coming and we were somehow responsible. And it would all have been an exercise in craft, a spur-of-the-moment performance-art piece, something nobody would remember for long, had it not started shelling and had we not, in our madness, remained motionless in spite of it, among the mad-dashing citizens."

"I was the first one up there in my tighty-whities, screaming giddily, staring one moment at the blue sky, the next at my white feet slapping the hard surface of the white cement, until the whiteness ended abruptly in a horizontal line and I found myself airborne above the blue, beneath the blue, in the blue and going up, up, up, I swear to God I would have been the first human to really fly had I not remembered, going up into the blue like that, that all my money was rolled up in a tobacco pouch hanging next to a pouch of another kind in my underwear."


And other passages that were a jumbled, pretentious mess. My favorite parts of the book were the stories about Ismet’s childhood in Bosnia, the heartbreaking stories of his depressed, chain-smoking mother and cheating father, the sweet stories of first love, and the funny stories about his acting in theatre.
I really hate the derogatory use of the word “pussy” to mean cowardly, and found the author used it frequently enough to annoy me and take me out of the story a few times.
Through his characters, real and imaginary, the author shows how difficult it can be to adjust to a new way of life. Though not a perfect story, it was a compelling one.
Also posted at Goodreads.
Posted by Nancy at 12:56 PM