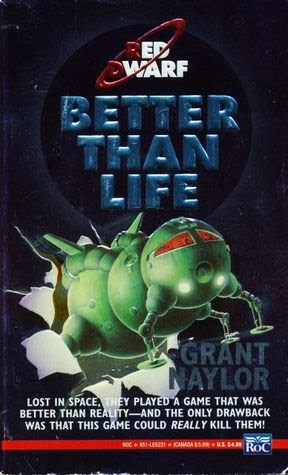 by Bob Grant and Doug Naylor

A wild and wacky SF series--based on the popular BBC-TV series--reminiscent of The Hitchhiker's Guide to the Galaxy. Lister--who passed out drunk in London and awakened in a locker on a moon of Saturn--now finds himself trapped in a computer game that transports players to the perfect world of their imaginations--a game people are literally dying to play.

Yet another Red Dwarf book based on an episode of the hit television series. It just goes to show that Grant and Naylor, when they are together, can write funny novels as well as funny TV scripts. This isn't just the episode there are a whole bunch of extras that really added to the story.

I found both Red Dwarf books on audio and just (re)listened to Infinity Welcomes Careful Drivers and it was a joy to hear Chris Barrie. I know I had just read the book but I had to listen to IWCD before I listened to this second instalment Better Than Life. I'm so glad I did as it set up a good mood that lasted until the end of this book and beyond. I'm still smiling. To hear it in Barrie's voice who is also a great mimic brought to life all the characters in the book. If you closed your eyes you felt sure that the show was on.

I've been in a humorous stories phase lately and this just fed right into it. I would count this as another must read or listen for fans and non fans alike.