The Alchemy of Stone 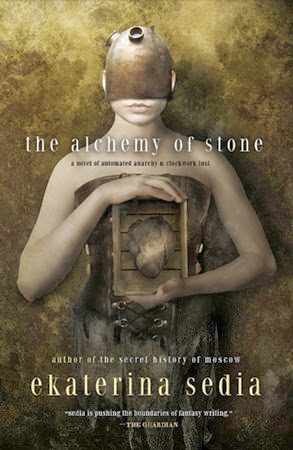 The Alchemy of Stone
by Ekaterina Sedia


Mattie, an intelligent automaton skilled in the use of alchemy, finds herself caught in the middle of a conflict between gargoyles, the Mechanics, and the Alchemists. With the old order quickly giving way to the new, Mattie discovers powerful and dangerous secrets - secrets that can completely alter the balance of power in the city of Ayona. However, this doesn't sit well with Loharri, the Mechanic who created Mattie and still has the key to her heart - literally!
My Review:

What a strange, lovely book. I fully admit that I decided to read this book solely because it features gargoyles. I kind of have a thing for <a href=http://en.wikipedia.org/wiki/Gargoyles_%28TV_series%29>gargoyles</a>. I'm pleased to report that Sedia delivered far more than just a favorite (and sadly underused) fantasy species.

The Alchemy of Stone is set in the fictional city of Ayona, built by the magical efforts of the stone-controlling gargoyles. The Ayona of the novel is in the middle of a power struggle, between forward-thinking, steampunky Mechanics and slightly more mystical Alchemists. Caught in the middle are the working classes, resentful of the power both Alchemists and Mechanics lord over them and of their often miserable positions in life. So yes, it is sort of a take on the Industrial Revolution, and revolution in general. It's a nicely constructed world, fascinating enough that I'd be happy to see Sedia write more books in this setting.

But as interesting as Ayona is, it's a backdrop to Mattie's story. Mattie is an automaton, an unusually bright one. She's smart enough to long for her own independence, and to have become as emancipated from her creator as it's possible to be. It's not enough. She wants to be the only one in control of her own destiny, to literally hold the key to her clockwork heart in her own hands and no one else's. It's Mattie's longing for freedom that drives the story, against her own construction and the will of her creator. The allegory there is obvious enough that it doesn't need to be pointed out, and it's effectively, movingly written.

I do wish that the revolution happening in the background had been a bit more than background, that we'd been able to see more of the wider story. But I'm also very, very happy with what Sedia did write, and with a perfectly ambiguous, open, satisfying ending.