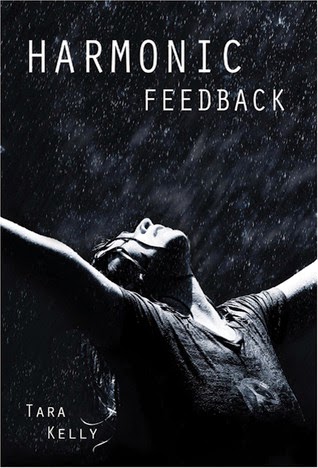 Sixteen-year-old, music- and sound design-obsessed Drea doesn't have friends. She has, as she's often reminded, issues. Drea's mom and a rotating band of psychiatrists have settled on "a touch of Asperger's."

Having just moved to the latest in a string of new towns, Drea meets two other outsiders. And Naomi and Justin seem to actually like Drea. The three of them form a band after an impromptu, Portishead-comparison-worthy jam after school. Justin swiftly challenges not only Drea's preference for Poe over Black Lab but also her perceived inability to connect with another person. Justin, against all odds, may even like like Drea.

It's obvious that Drea can't hide behind her sound equipment anymore. But just when she's found not one but two true friends, can she stand to lose one of them?

I wasn't sure what to expect out of this book when I started reading it. I had heard great things about the protagonist, Drea, and that Kelly had done a really good job at writing the thought processes of a character on the autism spectrum. That's what interested me, and that's why I read the book. As for plot specifics, I kind of didn't care. I was far more interested in the characters. I think that was the right way to go into this book.

The characters are, far and away, the best part. Drea's thoughts are easy to follow, and her perspective is always completely understandable, even when as the reader, I could see where her perceptions and the perceptions of people around her were clashing. And she's just a vibrant, memorable character all-around. I couldn't follow all her music-related geekery, but it felt credible, and it felt like the sort of conversations I would expect real music geeks to really have. I was impressed with the other characters, too. I especially appreciate how the designated "mean girl" was allowed to be more than the cliche.

But the last fifty pages or so of the book take a turn toward the melodramatic. I really wish Kelly hadn't gone this direction. Most of the book is built around the concept of Drea slowly opening herself to social interactions without putting up a false front, and I wish Kelly had stuck with that. The book didn't need that shot of drama, because it was moving enough on its own. And absorbing. I read this book in record time, because I couldn't put it down.

Where this book will probably succeed or fail with most readers is Naomi. She's a classic Manic Pixie Dream Girl, with a self-destructive streak. I found her to be very likeable, but she could also irritate me, and I don't doubt that many readers will find themselves unable to connect with her at all. But while I was disappointed with her story arc, I liked her more than enough to stay connected with the book to the end.

I would definitely recommend Harmonic Feedback, especially to anyone interested in reading characters on the spectrum. But be aware that it will take a sudden turn for the dramatic at the end.
Posted by Sesana at 12:00 AM