Easy Rawlins Is Back From the Dead 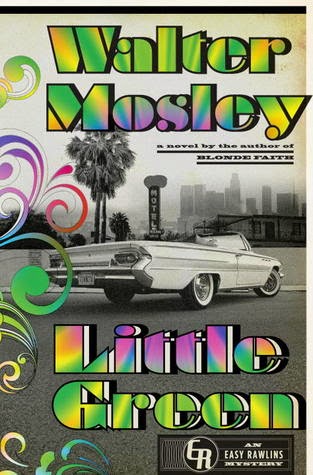 At the end of his last outing, 2007's Blonde Faith, Easy Rawlins went flying off a cliff in his car, presumably plunging to his death on the rocks below. Happily, that proved not to be the case. After everyone else had given up hope, Easy's best friend, Raymond, "Mouse" Alexander, comes struggling back up to the highway, bearing Easy's broken body on his shoulders. Easy remains in a semi-coma for some time, and when he finally awakens, he's really not sure whether he's dead or alive.

As one might imagine, after being so badly injured and after being in bed for so long, Easy is weak as a kitten and still in a lot of pain. Nonetheless, Mouse persuades Easy to rise from his sickbed, against the advice of everyone else, and go searching for a missing boy, Evander Noon, whom Mouse refers to as "Little Green." The relationship between Mouse and Little Green is more than a little mysterious, but Easy agrees to take on the job.

Given that he can hardly walk more than a few steps at a time, it would appear that Easy has his work cut out for him. Fortunately, a witchy woman named Mama Jo fixes him up with several vials of a "medicine" she calls Gator's Blood. One shot in the morning will restore Easy's strength for an entire day and so he's good to go.

Little Green was last seen headed for the Sunset Strip and so that's where Easy begins his investigation. It's 1967, the dawn of a new age in America. Hippies are everywhere; free love and the smell of good dope are in the air, and Easy isn't sure what to make of it all. Of course it's also shortly after the infamous Watts Riots and Easy is still well aware of his tenuous place as a black man in a white society, where many, including a lot of cops, are not yet ready to recognize him as an equal citizen.

Inevitably, the disappearance of Little Green will turn into a much larger and more sinister affair. The case itself is only marginally interesting, but as is always the case in these books, the real pleasure lies in watching Easy navigate his way through the larger world around him. Mosley writes brilliantly and, through his protagonist, has a great deal to say about the culture and society of the Sixties. It's great to have Easy and his surrounding cast finally back again.
Posted by James L. Thane at 2:59 PM