We Live in Water 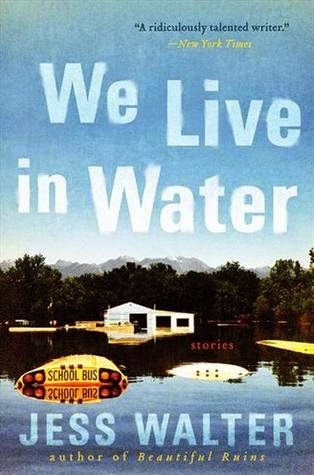 
The first collection of short fiction from New York Times bestselling author Jess Walter-a suite of diverse and searching stories about personal struggle and diminished dreams, all of them marked by the wry wit, keen eye, and generosity of spirit that has made him one of America's most talked-about writers.

We Live in Water is a darkly comic, moving collection of stories, published over the last five years in Harper's, McSweeney's, The Best American Short Stories, The Best American Non-Required Reading, Byliner, Playboy, and elsewhere. The stories veer from comic tales of love to social satire to suspenseful crime fiction, from hip Portland to once-hip Seattle to never-hip Spokane, from a condemned casino in Las Vegas to a bottomless lake in the dark woods of Idaho. This is a world of lost fathers and redemptive conmen, of meth tweakers on desperate odysseys and men committing suicide by fishing.

In "Thief," an aluminum worker turns unlikely detective to solve the mystery of which of his kids is stealing from the family vacation fund. In "We Live in Water," a lawyer returns to a corrupt North Idaho town to find the father who disappeared thirty years earlier. In "Anything Helps," a homeless man has to "go to cardboard" to raise enough money to buy his son the new Harry Potter book. In "Virgo," a local newspaper editor tries to get back at his superstitious ex-girlfriend by screwing with her horoscope. Also included are the stories "Don't Eat Cat" and "Statistical Abstract of My Hometown, Spokane, Washington," both of which achieved a cult following after publication online.

It usually takes me forever to get through short story collections. If a story doesn’t grab my interest, I’ll put the book down and read something else. Often, so much time has passed that I end up returning the collection to the shelf and forgetting about it.

Not so with Jess Walter’s first collection of short fiction. I inhaled these stories in just two sittings and by the end I wasn’t sure whether I wanted to:

a. empty my wallet every time someone asks for spare change.

b. take weight-loss pills that keep me up all night having wild monkey sex, but have the unpleasant side effect of turning me into a zombie completely unsuitable for nearly any type of employment.

c. grab some Greenpeace brochures, some young helpers, and create a scam to relieve rich liberals of their hard-earned dollars.

The prose is spare and powerful, making me forget I was reading a book and feeling at one with these characters who struggle through life, make poor choices, and suffer terrible injustices. Though there is bleakness and hardship here, there is just enough humor to make me laugh out loud a few times and keep the stories from being painfully depressing. The author writes from the heart and has a deep sense of empathy for his characters. It was hard for me to let them go.

The last story is Statistical Abstract For My Hometown, Spokane, Washington. It is much more than facts and numbers. Walters provides an intimate glimpse of his life and his conflicting feelings about his hometown.