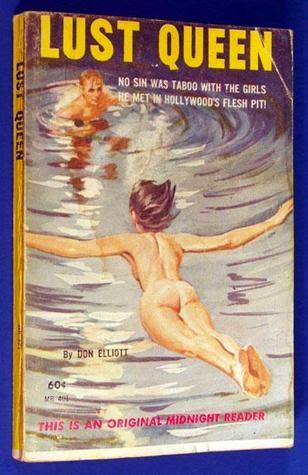 As a young man in the late 1950s, Robert Silverberg was enjoying a rising career as a science fiction writer. Then, suddenly, the sci-fi market collapsed and Silverberg, like many of his counterparts, found himself facing serious financial difficulty. As a solution, and to keep the rent paid, Silverberg turned to writing soft-core erotica--books that seem pretty tame by the standards of 2015, but which were definitely pushing the envelope in the early 1960s.

By 1964, the market for science fiction had improved once again, and "Don Elliott" retired so that Robert Silverberg could go back the work he really loved. Now, fifty years later, Stark House Mystery Classics has republished two of "Elliott's" books, including Lust Queen, which first appeared in 1961. Fifty-three years after that, the publisher included the book in a gift bag that I recently received at a convention, and naturally, I felt honor-bound to read and review it.

The book's protagonist is a young pulp-fiction writer named Joey Baldwin who, like Don Elliott, writes like mad, though Joey writes mostly detective stories. Like everyone who writes crime fiction, Joey is young, handsome, and incredibly sexy. He has a fantastically beautiful girlfriend named Lisa and they have mind-boggling sex on a regular basis, all of which is very tastefully described.

Joey gets a huge break when his agent brings him a new project. He's offered the chance to ghost write the autobiography of a famous Hollywood actress. The job could put Joey on Easy Street, relatively speaking, even though it would mean leaving Lisa in New York and living in a spartan hotel room in L.A. for a couple of months while he interviews the actress, Mona Thorne, and begins working on the book.

Joey takes the job with Lisa's blessing and flies to California. There he meets Mona Thorne who is fantastically beautiful and who insists that Joey should live, not in a spartan hotel room, but in her Hollywood mansion, which will facilitate their working together. Joey agrees and they spend his first afternoon in L.A., lounging around her pool while Mona displays her fantastically beautiful assets, her nipples "tipping sharply upward," and all that sort of thing.

After a great dinner at Mona's home, Joey goes to his room which, by some strange coincidence, connects with Mona's. Shortly after he turns out the lights, Mona slips into the room, slips out of her negligee, and climbs into Joey's bed. Joey can't imagine the thought of being unfaithful to Lisa, but he assumes that if he rejects Mona's advances, she might fire him from the project and his dreams of financial independence will go up in smoke.

Joey wrestles with this dilemma for a good five or ten seconds before concluding that sometimes a man's gotta do what a man's gotta do. He swallows his reservations and he and Mona have mind-boggling sex, all of which is very tastefully described. Over the course of the next couple of weeks, poor Joey finds himself becoming increasingly entangled in Mona's world. The work on the book goes well, and the sex is beyond belief, but Joey is increasingly troubled. Whatever will he do?

Lust Queen seems pretty dated now, and given the sort of thing one reads in even the tamest of books these days, it's hard to imagine that only fifty years ago, a novelist who dared to write scenes like these was pushing the boundaries and tempting a jail sentence. Certainly the book must have seemed a lot more titillating in 1961 than it does today; still, it's a fun read if you're in the mood for this sort of thing--a genuine blast from the past.
Posted by James L. Thane at 9:25 AM