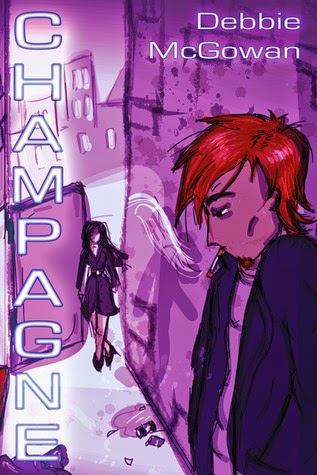 Haunted by the abuse of his now missing father, seventeen-year-old Sammy stumbles upon the seedy world of drug addiction and prostitution of London’s West End in the 1980s. Cold, desperate and exhausted, he takes shelter in a trash-filled alley behind a strip club, unaware that what is about to unfold will change the course of his life.

Set during a period of significant social and cultural change in the early 1980s, Champagne opens up a world of seedy revue bars, prostitution, abuse, drug addiction and the devastating effect of AIDS. Centred around the events of a declining revue bar and its regeneration, a young man comes of age and finds his first love whilst looking for his estranged, abusive father. Through dark humour and strong characterisation the book is not only eye opening but also manages to capture a truly unique time in popular culture.

It was the unusual title and bold cover illustration that caught my eye. Plus the fact that it took place in the UK during the 80’s which I imagine was as tumultuous a time as it was in the US.

17-year-old Sammy is prowling around the alley of a dingy, disreputable club, determined to find the father who heaped abuse on him and his mom. Instead of finding his father, he finds an opportunity to start a new life when he is offered a job sweeping the floor and doing other odds and ends at the club.

Sammy gets to know the other employees and regular patrons, and becomes intrigued with the moody and alcoholic Champagne, one of the club’s regular dancers. Sammy’s fear and shyness that is preventing him from approaching her is palpable.

“She beckoned him to come in, but he was finding it hard to move, so utterly overwhelmed that she had finally noticed him. He fixed his eyes on the small patch of floor he could see through the piles of costumes thrown across to a rail against the back wall of this tiny, square, hot dressing room with its strange orange glow. Shaking almost beyond control, he picked up the costumes and hung them untidily over the rail, aware of the beads of sweat forming on his bare neck. He could feel her staring at him, and he froze, the colour rising from his chest, his breath becoming heavy and laboured.”

Champagne is not who she appears to be, but Sammy’s love has not wavered, even though finding out the truth was like a gut punch.

I loved watching Sammy’s growth throughout the story, as he learns about himself, and as he is forced to accept responsibilities and acquire some business sense after coming into possession of an inheritance. Though he still loves Champagne, that love is not returned, creating emotional turmoil in young Sammy’s life and affecting his future relationship with Frank. Even though Sammy is not always a likable character, I appreciate all his flaws. He feels complex and unique.

I also loved the variety of characters, some of which are even more troubled than Sammy is. This is a beautiful and heartbreaking story that left me angry, sad, frustrated, and hopeful. It is also uneven, and could benefit from the skills of a good editor to streamline the writing, address the shifting points of view, and scene transitions. I would have liked more of the action to take place outside the club, as it felt claustrophobic at times. The smoke and stale beer smell was starting to get to me, and I needed a breath of fresh air.

The open-ended non-ending left a whole lot of loose ends, which can be frustrating to those readers looking for closure. To me, it represented a new beginning for Champagne and Sammy. I very much look forward to seeing what life has in store for them.
Posted by Nancy at 8:13 AM