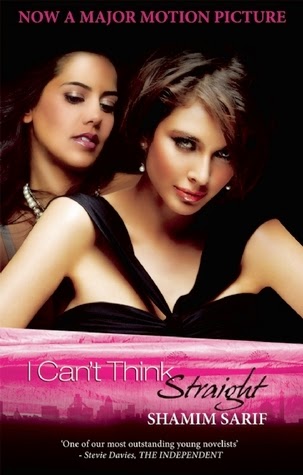 
Tala, a London-based Palestinian, is preparing for her elaborate Middle Eastern wedding when she meets Leyla, a young British Indian woman who is dating her best friend.

Spirited Christian Tala and shy Muslim Leyla could not be more different from each other, but the attraction is immediate and goes deeper than friendship. As Tala’s wedding day approaches, simmering tensions come to boiling point and the pressure mounts for Tala to be true to herself.

Moving between the vast enclaves of Middle Eastern high society and the stunning backdrop of London’s West End, I Can’t Think Straight explores the clashes between East and West, love and marriage, conventions and individuality, creating a humorous and tender story of unexpected love and unusual freedoms.


This was the perfect book to read while I was snowed in and work was closed.

Tala is a Palestinian living in London. She’s very outgoing and forthright. After three engagements, her parents really hope this one will stick. Hani is a very nice guy and Tala loves him. Leyla is an Indian Muslim. She works at a job she’s not passionate about, while her true love is writing. Other than a mutual attraction, Tala and Leyla have little in common. They both come from strict, traditional cultures that don’t have a very positive view about homosexuality. Despite these difficulties, the two women eventually fall in love.

The romance happens a little fast, and the plot is rather predictable. Still, I gulped it down in one sitting and enjoyed this light and pleasant story. What I liked most about it is the glimpse into middle-eastern culture, the clash between traditional and western values, religious and class differences, and the interactions between lovers, friends, and family.

There was a large cast of interesting, well-developed secondary characters and other minor characters that could have been fleshed out a little more. I was especially curious about Tala’s uncle, Ramzi, who was likely gay. It would have been so much easier on Tala if they were closer and opened up to each other about their sexuality. Another interesting minor character was Rani, Tala’s mother’s Indian housekeeper who occasionally spits in her coffee. I get that she probably resented the family’s wealth, but I didn’t understand her acrimony.

If you are looking for graphic sex scenes, look elsewhere. This is a thoughtful and humorous story about two young women who eventually find themselves and choose a different path. The ending made me smile.

Maybe I'll watch the film while the book is still fresh in my mind.
Posted by Nancy at 5:00 AM