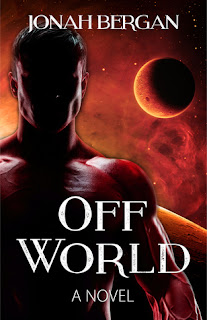 Jonah Bergan
Edge
4 out of 5 stars
Reviewed by Nancy


I was thrilled to get the opportunity to read this, as I love science fiction that features well-developed nonhuman species that possess significantly different physical characteristics and psychological lives than their human counterparts. Even better if they have empathic abilities!

Taine is a Lowman hunter, a red-skinned, black-eyed alien referred to by the hicks who inhabit the backwater world he is traveling in as “redder” or “devil”. The story starts off with Taine’s purchase of a young, blond slave he names Sunshine. He later picks up an apprentice named Tanner, who is roughly 5 years older than Sunshine. The three men embark on an adventurous journey fraught with hazards. Even though Taine is big and strong, they are living in a female-dominated society where men are seen as inferior and slavery (sexual and manual labor) is legal and acceptable.

This is an ambitious, compelling tale that is cleanly written and edited, with sharp dialogue that helps move the story along smoothly, and an exploration of life in a repressive society, sex discrimination, slavery, and human/alien relationships that occasionally gets mired in wordiness.

Not only does Taine have awareness of life around him, he has the ability to penetrate and manipulate thoughts, and feed on a person’s “essence”. While this may leave a human exhausted, it will not cause them any harm. It is Taine who could be harmed be feeding, not knowing what darkness, complexities, or conflicts may reside in human minds.

While the first two-thirds of this story revolves around the three men, the last third introduces the dangerous and powerful witches who invade planets and enslave men, subjecting them to harsh mind control experiments. Taine’s struggle to shield himself from the witches’ influence and domination, and efforts to save the lives of Tanner and Sunshine was riveting, but I was disappointed that interesting minor female characters were given little page time. Many unanswered questions and certain unresolved plot elements beg for a sequel.

Overall, a worthwhile read.
Posted by Nancy at 12:23 PM