The Man Who Was Thursday: Centennial Edition by G.K. Chesterton
My rating: 4 of 5 stars 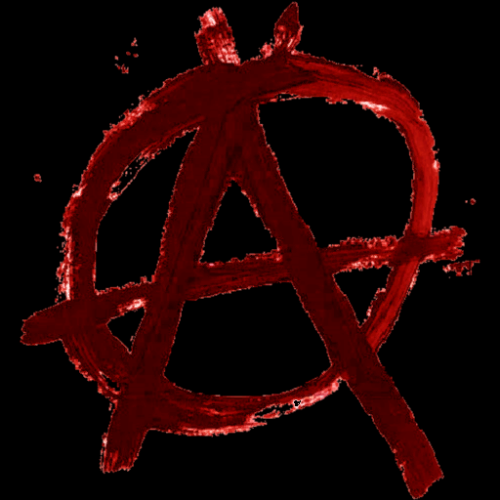 Gabriel Syme attends a dinner party of his friend, the poet Lucian Gregory. He is there under a pretense of friendship, but his true intention is to find out if his friend can be his entry into joining a group of anarchists. You see, Gabriel Syme ”was not merely a detective who pretended to be a poet; he was really a poet who had become a detective.” There might be some assumptions that the best way to infiltrate an anarchy group is by hanging out in dive bars, brothels, and dens of inequity (my favorite) where the disgruntled, unwashed masses would gather, but Syme is much more suited to mingling with the intellectual set. These men of high ideals might see anarchy in a romantic light and prove to be as dangerous in their naivete as the man, scarred by life, looking to get even with a government for ill treatment or with a society who chose to ignore him.

”The ordinary detective goes to pot-houses to arrest thieves; we go to artistic tea-parties to detect pessimists.The ordinary detective discovers from a ledger or a diary that a crime has been committed. We discover from a book of sonnets that a crime will be committed. We have to trace the origin of those dreadful thoughts that drive men on at last to intellectual fanaticism and intellectual crime.”

Syme, purposely, pushes his friend. Traps him really, into feeling a need to prove to Syme that he is a true anarchist and not just a man of radical thought incapable of deed. Syme tries to reassure Gregory’s pretty sister that all will be fine. She feels her brother may have said too much. ”Now, sometimes a man like your brother really finds a thing he does mean. It may be only a half-truth, quarter-truth, tenth-truth; but then he says more than he means---from sheer force of meaning it.”

I’d like to know how many times I’ve said something that sounds clever, but logically is full of holes. Someone pops off with some dismissive comment, and the next thing I know, I’m scrambling to defend a thought that was barely a concept to begin with. I’m bailing water out of the boat and trying to patch the bottom at the same time, but I’m too stubborn to just let it go because I know the seed of the idea was something worth defending. So we do wonder if Gregory has any real idea of what true anarchy is or is he just a bored poet who finds the whole idea of belonging to a bomb throwing organization... exciting.

In other words, is he a true believer or an annoying, bombastic, romantic moron?

For the purposes of our hero Syme, it may not matter. The young man turns out to have a legitimate connection to a group of anarchists who each go by a name of the week. Gregory is intent on becoming Thursday, but Syme convinces the group to add him to their network instead of his friend. He deftly gets what he wants and at the same time puts his friend out of harm's way.

Syme is a ”rebel against rebellion” which is really, if truth be known, what I am as well. I don’t want the general social order to be disrupted. Usually the people who die when a bomb is exploded are just normal, hardworking people who are picking up food for dinner, or dancing with some friends, or going to work. Their deaths are meaningless, except for the fact that their death provides a number that will have terrorists giving each other high fives and politicians wringing their hands. So I’m against anarchy because all it does is destabilize society in an attempt to replace a government with a new government that would quickly resemble the old government.

Besides bombs, gunfire, rape, murder, and all that screaming tends to disrupt my reading time.

G. K. Chesterton was a serious man passionately interested in the occult, theology, and philosophy. Usually when I see those three branches of study all attached to the same individual, I think to myself that this was a person questing to understand the mysteries of life. The interesting thing about this book is you can read it on a multitude of levels and still enjoy the book. You can see it as a metaphysical thriller or as sarcastic political intrigue or as commentary on a society searching for god in all the wrong places.

The power in the anarchist group rests with the man Sunday, who intimidates the rest of the members. He is a large man or does he just seem to expand when he needs to make a point. His eyes are blue, blue as the sky. His hair is snow white, like the peaks of the highest mountains. As the plot turns fantastical, he takes on a supernatural aspect that leaves this reader wondering if he was the god, or a god, or just a man touched by god.

Of course, it all becomes comical as one after the other, the members of this anarchist society, turn out to be someone other than what they pretended to be.

I mentioned philosophy; how about this for something to ponder?

There is also intrigue. Syme is finally relaxing in the belief that he has lost a man who has been tailing him all over the city.

”When he had been seated for about half a minute, he heard behind him a sort of heavy asthmatic breathing.

Turning sharply, he saw rising gradually higher and higher up the omnibus steps a top hat soiled and dripping with snow, and under the shadow of its brim the short-sighted face and shaking shoulders of Professor de Worms.” 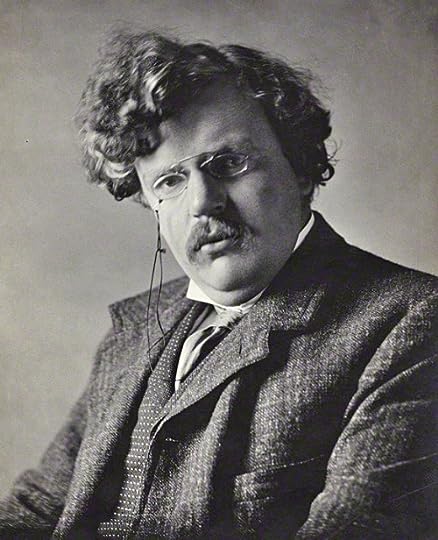 Chesterton was a large man standing 6’4” and weighing 286 pounds.

There is no doubt in my mind that G. K. Chesterton was brilliant, quite possibly a renaissance man in his desire to understand everything. His prose is at times exquisitely glistening with honey dipped poetry. The book can be confusing with twists and turns made more difficult with an overlay of nightmarish fantasy. I wish I’d been able to read it in one sitting so I could keep the reins of the many divergent thoughts firmly held in my hands like a team of prancing Lipizzan horses.

This is a fascinating book that deserves to be read more than once, and without a doubt I’d be closer to understanding exactly what Chesterton was intending the more times I read it. My copy of the book will be slid back on the shelf very gently in case there are any bold ideas or a stray piece of dynamite that could roll out on the floor at my feet. Both are equally dangerous, and I’m simply not as fast on my feet as I used to be.

Posted by JEFFREYKEETEN at 5:17 PM