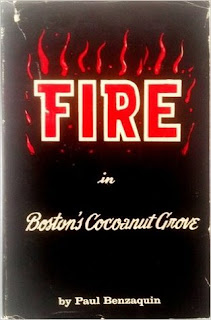 
A detailed account of the deadliest nightclub fire in history.

Reading Stephanie Schorow’s excellent, but short, The Cocoanut Grove Fire, made me hungry for more details, so I borrowed Paul Benzaquin’s history, which is far more comprehensive. It was first published in 1959, and while the language felt dated in places, it enabled me to feel closer to an event that occurred well before I was born and helped provide more insight into life in the 1940’s.

Paul Benzaquin began his career as a journalist for the Boston Globe in 1948 and later became known as a talk radio host.

His crisp, lean writing style worked well for imparting facts from that tragic day on November 28, 1942, while the tension and energetic pacing would have worked well for an action-packed thriller.


“First came a fast-moving puff of black smoke. A rosy dart of flame shot along the ceiling fabric for ten or twelve feet. It was instantly followed by a massive ball of flame – bright, noisy, and terrifying. It seemed to burn in the air, without need of fuel. Suddenly everyone in the room was in motion, desperately seeking escape.”

Schorow focused more on the history of the nightclub and its owners and government corruption, while Benzaquin covered life stories and details surrounding the aftermath of the fire, including significant medical advances made in the treatment of burns.

In the center of the book there are photos of Cocoanut Grove guests, some of whom were among the dead or injured, including Western star Charles “Buck” Jones. There are harrowing photos of servicemen, firemen and volunteers who helped evacuate victims, and pictures of the building after the fire. There is a photo of Clifford Johnson, who recovered from massive burns and made medical history, only to die in a fiery car crash in 1956.

At the end of the book is an acknowledgment section outlining the author’s sources of information and the individuals and groups who contributed toward his research. He spoke with reporters, photographers, fire and police departments, government officials, medical personnel, and survivors who shared their stories.

492 people died in this fire, making it the deadliest nightclub fire in history. Because of this tragedy, laws have been made and fire codes revised to ensure the safety of people in public buildings.

This is a detailed, informative, and gripping story of the events and people involved. Very highly recommended.