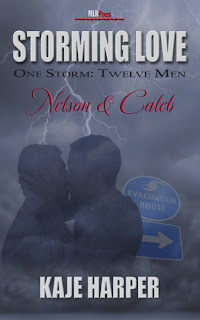 Nelson Dunn has a settled routine - an evening security-guard job, days off for his therapy dogs, occasional club sex, and good books. He sometimes dreams about more, but he's made himself content. So when Hurricane Lauris strands Caleb Robertson at his house, Nelson has mixed feelings about having an attractive guy in his space. Especially when nothing more can possibly happen.

Caleb went to the hospital to get the cast off his broken foot. Instead, he finds himself waiting out the storm with Nelson, his three dogs, and a very wet cat. It's less of a hardship than he'd have expected.


I enjoy stories about people who are forced together by events out of their control, and this was no exception. It is also my first experience reading Kaje Harper. It definitely won’t be my last.

Nelson Dunn is an ex-cop who now works as a security guard. In his free time, he and his three dogs, Bonnie, Troy, and Snaps, volunteer at a local hospital. Nelson derives enormous satisfaction from seeing the smiles on the young patients’ faces.

Unfortunately, a hurricane is brewing and the hospital is making emergency preparations, so Nelson’s visit is cut short. He recognizes the voice of a man who works in the same building where he is a guard and offers him a ride home.

Caleb Robertson was visiting the hospital to get his cast removed, but learned that it needs to stay on another two weeks. Though it sucks to be incapacitated in such bad weather, he is grateful for Nelson’s invitation to stay at his house, as the storm becomes increasingly more dangerous.

Though the men are spending a lot of time together in close quarters and eventually act on their mutual attraction, this is not a light, fluffy romance where life is simple and the emphasis is solely on the physical. Both Caleb and Nelson have been hurt by past events and have decided a solitary existence is best. Even though the span of this story is just a few days, the men take their time getting to know each other and gradually opening up about their insecurities and imperfections accompanied by the stress, anxiety, and uncertainty of dealing with an unpredictable storm.

Nelson likes to have a plan, while Caleb is better at improvising. Nelson likes to write and Caleb likes to draw. Both love their pets dearly, but Nelson is passionate about dogs while Caleb prefers cats. Their differences and similarities make them very well-rounded and realistic characters who work well together when presented with challenges.

This was sweet, sad, and beautiful. No excess drama or angry outbursts, no shocking revelations, just quiet, powerful and touching moments.