The Joy of Hate 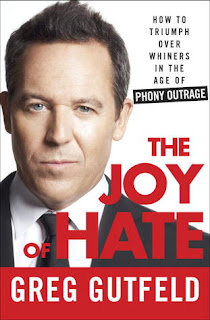 From the irreverent star of Fox News’s Red Eye and The Five, hilarious observations on the manufactured outrage of an oversensitive, wussified culture.

Greg Gutfeld hates artificial tolerance. At the root of every single major political conflict is the annoying coddling Americans must endure of these harebrained liberal hypocrisies. In fact, most of the time liberals uses the mantle of tolerance as a guise for their pathetic intolerance. And what we really need is smart intolerance, or as Gutfeld reminds us, what we used to call common sense.

The Joy of Hate tackles this conundrum head on--replacing the idiocy of open-mindness with a shrewd judgmentalism that rejects stupid ideas, notions, and people. With countless examples grabbed from the headlines, Gutfeld provides readers with the enormous tally of what pisses us all off. For example:
- The double standard: You can make fun of Christians, but God forbid Muslims. It's okay to call a woman any name imaginable, as long as she's a Republican. And no problem if you're a bigot, as long as you're politically correct about it.
- The demonizing of the Tea Party and romanticizing of the Occupy Wall Streeters.
- The media who are always offended (see MSNBC lineup)
- How critics of Obamacare or illegal immigration are somehow immediately labeled racists.
- The endless debate over the Ground Zero Mosque (which Gutfeld planned to open a Muslim gay bar next to).
- As well as pretentious music criticism, slow-moving ceiling fans, and snotty restaurant hostesses.

Funny and sarcastic to the point of being mean (but in a nice way), The Joy of Hate points out the true jerks in this society and tells them all off.

I don’t watch much TV, unless it’s a series that I can get hooked on or a movie. I generally stay away from talk shows, reality shows, comedies, and news/opinion shows. So I’ve never heard of Greg Gutfeld.

I’m so glad I came across Mike's review and gave him a chance.

His essays are proof positive that the left does not have a monopoly on intelligence, humor, or sarcasm.

Just last week, I was going to pull into a parking spot at Market Basket when this woman comes flying out from in between cars and beats me to the spot while fixing me with a nasty glare. Her shabby car was festooned with bumper stickers. After her appalling behavior, this was the one that stood out the most:

If she were truly tolerant, she would have let the old woman with the bad foot (and better car) take the spot closer to the entrance.

I’m sure Greg Gutfeld would have a good laugh over that one. I know I did. This is the kind of artificial tolerance that he talks about.

Though I tend to think these essays would be more appealing to those who lean to the right on the political spectrum, independent thinkers who don’t blindly accept one worldview and those who tolerate others with different views may get something out of it too.

I laughed even while he was dissing one of my favorite bands:


“The idea of tolerance – a seemingly innocuous concept – has now become something else entirely: a way to bludgeon people into shutting up, piping down, and apologizing, when the attacked are often the ones who hold the key to common sense. They speak an unspeakable truth, and they get clobbered by the Truncheon of Tolerance. Tolerance has turned normal people into sheep/parrot hybrids, followers in word and deed – bloating and squawking at everyone in a psychological torment not experienced since Dave Matthews picked up a guitar.”

Some of my favorites were:

- My Big Fat Gay Muslim Bar
- A Really Bad Day at the Office
- To Obama, Borders Was Nothing But a Bookstore
- A Pack of Lies
- Stalin Grads

While I don’t agree with everything he says, reading these essays was fun, refreshing, thought-provoking, and a perfect way to spend time on the beach.

One of these days I’ll check out his show.
Posted by Nancy at 2:53 PM