THE EAGLE HAS LANDED BY JACK HIGGINS

Eagle Has Landed by Jack Higgins
My rating: 4 of 5 stars

”The slab slid to one side, tilting on the slope of the mound, and all was revealed. I suppose it was one of the most astonishing moments of my life, for it was a simple stone with a German cross at the head--what most people would describe as an Iron Cross. The inscription beneath it was in German: Here lies Lieutenant-Colonel Kurt Steiner and 13 German paratroopers, killed in action on November 6th, 1943.” 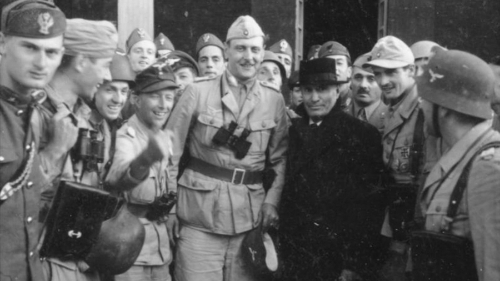 Really this story begins with Operation Oak or the San Gasso raid, in which commando paratroopers led by Lieutenant Colonel Otto Skorzeny rescued Benito Mussolini after he was overthrown and imprisoned by the Italian Government in 1943. It was a daring, bold move that gave some hope to a war effort that was already beginning to crumble inward.

Hitler, invigorated by this success, demands an even more audacious mission to capture Winston Churchill and bring him back to the Reich. Admiral Wilhelm Canaris thinks this idea is absolutely insane, but then his loyalty to Hitler has transformed into a more deeply felt loyalty to the future of Germany. Heinrich Himmler, also present during this meeting, is suspicious and threatened by Canaris, and decides to support the plan more for political reasons, in a bid to undermine Canaris, than out of any real interest in the plan. Jack Higgins does a wonderful job showing the struggles within the party and the doubts about the viability of the war that were starting to afflict all but the most loyal of the inner circle. 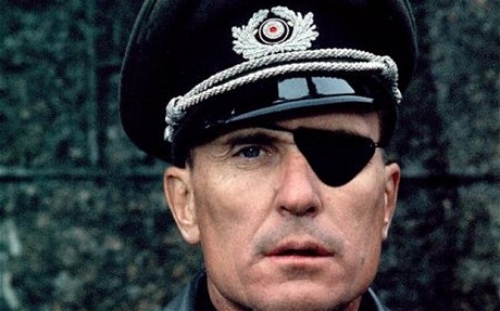 Colonel Oberst Radl played by Robert Duvall in the movie

Unfortunately, Canaris assigns the project to a very efficient staff member named Colonel Oberst Radl, who promptly discovers a way for such an intrepid plan to succeed. It all comes together when a deep cover agent in a small community in Norfolk reports that Winston Churchill is scheduled to visit their little hamlet for some much needed R&R to paint some of the idyllic countryside.

Joanna Grey is a fascinating character. She lost her family during the Boer War in South Africa and, through a series of events, ends up living in the very country she despises the most. She has become close, bedsheet close, to the local aristocracy, and in a bid to impress his mistress, he can’t help but tell her the biggest news he’s ever had bounce around in his noggin. I have to say I’m impressed that a 68 year old woman can still twitch her skirt and catch the eye of a man who normally would be chasing after women decades younger than himself. She must have that something something that allows men to see beyond the iron gray hair and the wrinkles and see that inner flame that, with just a touch, sparks their pilot light.

She is too old in the minds of the men in Berlin to handle this mission, though frankly, I think they sold the old girl short. Luckily, they have the man they need right there in Berlin, teaching English Literature at the University, a Trinity graduate and an IRA member named Liam Devlin. Embracing the Nazis has been difficult, but the enemy of my enemy is my friend makes them...allies??? Devlin thinks the plan is a bit daft, but he is bored and wants to get back into the action. Any way that he can twist a thumb in the eye of the British helps the cause in Ireland. He is more of a lover of women, a drinker of Bushmill’s Irish whiskey, and a reader of poetry than he is a soldier, but he can handle himself, and nobody gets into Trinity College with just a wink and a bit of wit. 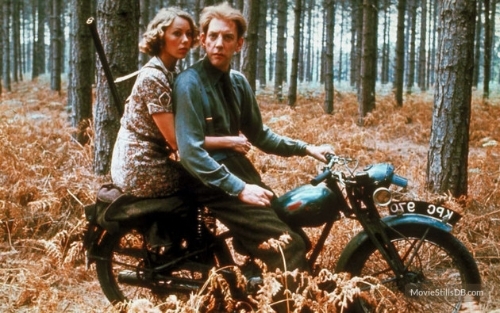 Donald Sutherland is Liam Devlin in the movie. That is Jenny Agutter looking lovely perched on the back of the bike.

Radl finds his man to lead the mission, the disgraced Lieutenant Colonel Kurt Steiner, son of a German general and an American mother. He is a man who readily admits that, if his parents had switched nationality, he could easily have found himself fighting with the Americans. Steiner is in the Channel Islands sitting on manned torpedoes, attempting to blow up Allied shipping. Remember Slim Pickens riding the bomb down to the surface of the Earth in Dr. Strangelove? Similar level of risk.

All the pieces are in place; now it is just a matter of pulling the trigger. 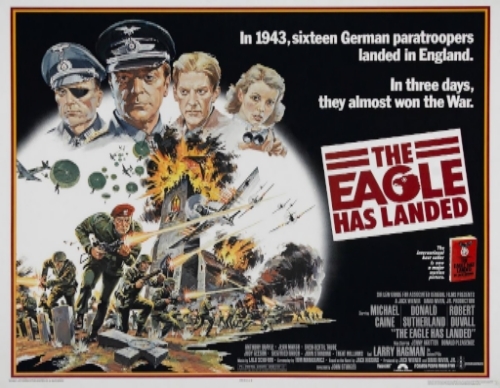 This was a huge best seller that spawned a very successful movie, released in 1976, starring Donald Sutherland, Michael Caine, and Robert Duvall. I look forward to watching the movie to see how closely it follows the book. If you are going to read one Jack Higgins book, this is the one. The publisher states that 50% of the book is absolute fact, and it is up to the reader to determine what of the rest of it is true or merely speculations by the writer. This book is a page turner. The characters are well developed, even the female characters. We really get a chance to understand motivations, even when Radl or Devlin or Steiner or Grey find themselves questioning the meaning of what they do. There is a doomed romance, adding a bit of poignancy to the thrilling aspects of what seems to be an ill-fated quest. There is courage, treachery, humanity, and cruelty, each working to squeeze the resolve of those involved. All of this leads up to one final epic attempt to accomplish the impossible.

Posted by JEFFREYKEETEN at 8:55 AM