Truth in the Dark 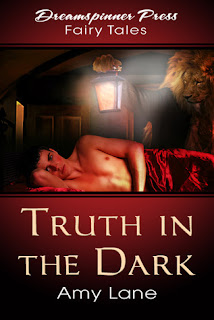 Knife's entire existence has been as twisted as his flesh and his face. The only thing beautiful in his life is his sister. When Gwennie is obliged to turn a suitor down because she fears to leave her brother to the brutality of their village, Knife is desperate for anything to ensure her happiness.

Her suitor's cousin offers him a way out, but it won't be easy. Aerie-Smith has been cursed to walk upright in the form of a beast, and his beloved village suffers from the same spell. Aerie-Smith offers Gwen a trousseau and some hope, if only Knife will keep him company on his island for the span of a year and perform one "regrettable task" at year's end.

Knife is unprepared for the form the island's curse takes on his own misshapen body. In one moment of magic, he is given the body of his dreams—and he discovers that where flesh meets spirit and appearance meet reality, sometimes the only place to find truth is in the darkness of a lover's arms.

“If anyone had learned that love was all the beauty the world needed, it was my lion-hearted beloved and his imperfect lover.”

I usually like Amy Lane’s blend of sweetness and angst and was keen to read a re-worked version of Beauty and the Beast, but this story just didn’t work for me on so many levels.

- The pace was excruciatingly slow, so slow that I feared not finishing it up in time to complete my reading challenge this month. Many times I was tempted to skim or abandon it. I was glad I held out, though, for the ending was realistic and satisfying.

- Naef’s physical and emotional pain was exquisitely rendered. I hated being in his head, however. His bitterness, self-loathing, swearing, and constant correction of his name (“my name is Knife”) became annoying.

- The relationship between Naef and Aerie-Smith happened way too fast and lacked spark. Their sex was frequent, but unerotic. Maybe it’s just the thought of doing it with a lion, even if he stands on two legs and wears a high-quality waistcoat, that was a complete turnoff for me.

- While I felt Naef’s character grew significantly, I wanted to feel that growth in his and Aerie-Smith’s relationship as well. As a couple, they left me feeling unconvinced.

- Aerie-Smith was a rather flat character who was too perfect.

- I really enjoyed Naef’s passion for carving and how he used it to express himself.

- Kudos for including interesting and likable female characters.

I wanted to like this story a lot more. There were some powerful turns of phrase, and sentences that had me scratching my head.