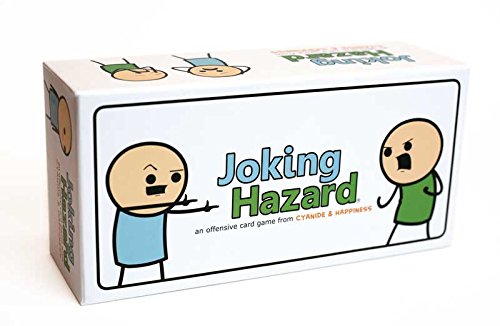 Joking Hazard
Publisher: the creators of Cyanide and Happiness
My Rating: 5 out of 5 stars


Back in the day, my girlfriend at the time turned me on to Cyanide and Happiness, a webcomic that was in alignment with my own twisted sense of humor.  Now, a decade later, the keys to the universe are in the hands of me and 2-4 of my closest friends.

Joking Hazard is a card game for people with a dark and twisted sense of humor.  The box includes 360 cards, each a panel from a Cyanide and Happiness strip, and the instruction sheet.  The game is pretty simple.  Whomever's turn it is flips over a card from the deck, adds one of their own to the strip, and the remaining players try to end the comic strip in the funniest of ways.

Yeah, it's a hilarious experience.  The replay value is pretty high.  We've played a few times now and it hasn't worn thin yet.  I'm chomping at the bit to get the expansions for even more demented fun.

Joking Hazard is a hilarious game that should appeal to fans of Cards Against Humanity and dark humor in general.  Five out of five stars.
Posted by Dan Schwent at 12:00 AM