Richard Nixon: The Life by John A. Farrell
My rating: 5 of 5 stars

”The president ‘was an almost completely political animal. He was neither moral nor immoral, but was amoral,’ said Farmer, the civil rights leader….’I don’t think right or wrong entered into it.’

‘Nixon would have been recorded as being a very great president had it not been for the fatal character flaw,’ said Farmer. ‘He did not believe in anything.’” 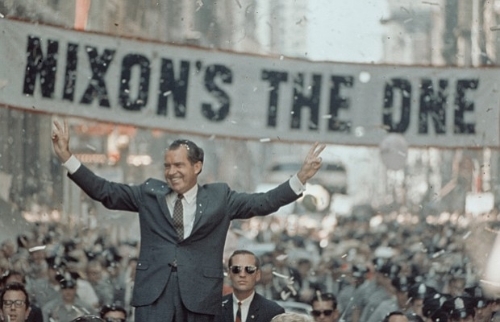 I can remember in 1994 when Richard Nixon died that one of my friends, who has been an unrepentant hippy her whole life, said she was going to the Nixon funeral, but only if it was an open casket. She wanted to make sure the SOB was really dead. Nixon certainly inspired this level of animosity, not only in political enemies, but the numerous personal enemies he made over the years for being...well...a dick.

”’When you got into a campaign, especially with a guy like Nixon whose guts we hated, it was easy to get combative. You’re not running against a nice guy. You’re running against a first-class son of a bitch.’”

I didn’t know much about Nixon’s early days in California. John A. Farrell gives some background. The deaths of several members of his family seemed to have a lifetime impact on Nixon. I was more interested in what kind of man he was after he got back from service in WWII. I thought maybe I would see the progression of a brash, idealistic, young man who eventually evolved into the brooding, wounded Darth Vader who resigned in 1974. His opponents, from Jerry Voorhis for the 1946 House seat to the ‘pink lady’ Helen Gahagan Douglas in 1950 for the Senate seat, were both completely unprepared to face the type of tactics that Nixon was willing to unleash. Winning was everything. There was no sense of decorum in a Nixon campaign. There was no progression, Nixon was as ruthless at the beginning of his career as he was at the end of his career.

I know you are going to be shocked about this, but there were two main staples of Nixon’s campaign tactics. One was to paint any Democrat as soft on communism, thus dubbing Helen Gahagan Douglas as the pink lady. Two was to lie and, when caught in a lie, to lie about ever saying the lie. Then, bludgeon the opponent for using unfair tactics by calling Nixon a liar.

When he was campaigning to be Dwight D. Eisenhower’s vice president, he called President Truman a traitor. Which is a *gasp* moment. Where is the line that should never be crossed? Then, he denied saying it. He became furious when reporters started carrying around tape recorders to his events. We have discovered in the current political climate that even getting a politician on tape may not be enough to convince his party followers to condemn him.

I was surprised to learn that Richard Nixon was Tricky Dick Nixon from the first moment he decided to become a politician. There was simply nothing he wouldn’t do to win a campaign. It was all about winning and achieving power. Whatever he had to do to make that happen was not weighed on a moral scale, but was weighed by how much it would help him win and by a calculation of what his chances were to get away with it.

I knew he was diabolical, but underneath it all, I thought maybe there was merit. I’d, over the years, began to give him some credit for being a good statesmen, after office. I considered him a thoughtful writer who seemed to see the world with more objectivity and not through the darkened optics of a warped Nixon lens. 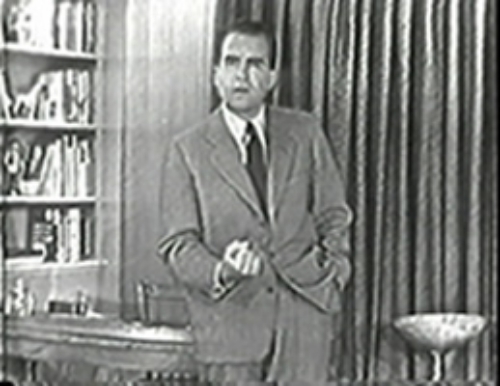 This is the moment in the speech when Richard is showing how he has the universe by the nuts and how he is going to squeeze until he gets what he wants.

His famous Checkers speech, when he went on the air and defended his use of campaign finances, was that moment in time when his footnote to history could have been smaller. Eisenhower was about to drop him from the ticket as his vice president. This is one of those moments in time where Nixon could explode, casting his boiling vile and deep seated hate for the world in all directions. He could have been the disgruntled civil servant who throws grenades over his shoulder as he walks out the door. This speech was given with such feeling and passion that he brought tears to the eyes of the film crew, not to mention the public.

How does he do that? He doesn’t even like people enough to pull off a speech like that. The only thing I can think is that his adoration for himself overcame his natural loathing for himself long enough for him to save his career. He didn’t want “them” to win.

Escaping these moments, and there are many throughout his career where he should have been politically destroyed, kept enhancing his ego, gave fire to his paranoia, and, ultimately, lead to his spectacular demise.

”’Who will rid me of this meddlesome priest?’ mused Henry II, and a knight seeking royal favor murdered Archbishop Thomas Becket in the cathedral at Canterbury. Did Richard Nixon order every breach of the law? No. But in May 1971 he called for the wiretapping of his Democratic foes. And in June he instructed Haldeman and Colson: ‘You’ve got to really have a sophisticated assault upon the Democrats. Humphrey must be destroyed. Muskie must be destroyed. Teddy Kennedy must be.’ It wasn’t hard for Nixon’s knights to know what the sovereign wanted. Nixon’s mutterings led not to Canterbury, but to Watergate.”

The dubious men who were hired to carry out these clandestined tasks called themselves The Plumbers, but plumbers all over the world should be insulted because of what bumbling fools they turned out to be. Certainly, Nixon did not specifically order everything these idiots attempted to do, but to be frank, Nixon loved the covert nature of their cloak-and-dagger enterprises. He wanted to know details so that he could relish in the belief that he was smarter and craftier than his moron opponents. What sinks him is a White House tape from June 23rd. Oh, yes, the taping setup that would help him write books about his life as president after office. He would have plenty of time to write books, sooner than he thought.

Farrell talks about some interesting things that have been revealed for the first time. I’m not going to go into detail because those are the type of things that encourage people to read the book for themselves, but one particular covert Nixon action is haunting for me because it led to seven more years of war in Vietnam. The cost in blood and money was going to be steep.

I was also really bothered by his selection of Spiro Agnew as vice president. ”The selection of Spiro Agnew revealed Nixon at his worst. It was a cynical nod, a race-baiting wink--a catastrophic blunder. It was Nixon’s first ‘presidential’ decision--the choosing of a running mate--and a disaster.” Nixon referred to Agnew as the ”assassin’s dilemma.” I felt the same way when George H. W. Bush selected Dan Quayle, or how about George W. Bush putting Dick Cheney one heartbeat away from the presidency, or how about the baffling choice of Sarah Palin by John McCain? Are these choices merely hedges against assassination? Nixon was that cynical. I’m not sure these other presidential candidates were, but sometimes I do wonder. 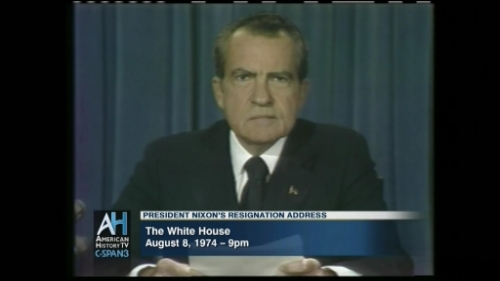 Dick, if you stare into the camera with enough intense concentration, maybe the world will burst into flames.

Farrell’s writing style is very fluid. He does not become bogged down in minutiae. Certainly, my perspective has shifted once again about one of the more conflicted and controversial figures in American history. Unfortunately, history tends to repeat itself, and here we are stuck with another paranoid, delusional, blustering court jester in the presidency. People tell me how boring they find history to be, but they don’t seem to realize that, by reading the past, you are reading the present and the future. It is infinitely fascinating.

Posted by JEFFREYKEETEN at 8:07 AM