Let's Go Play at the Adams' 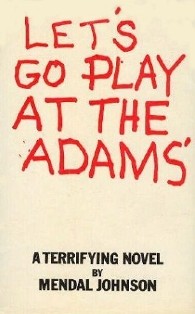 Mendal W. Johnson
Crowell
Reviewed by Nancy
5 out of 5 stars

But what Barbara didn't count on was the heady effect their new-found freedom would have on the children. Their wealthy parents were away in Europe, and in this rural area of Maryland, the next house was easily a quarter of a mile away. The power of adults was in their hands, and they were tempted by it. They tasted it and toyed with it -- their only aim was to test its limits. Each child was consumed by his own individual lust and caught up with the others in sadistic manipulation and passion, until finally, step by step, their grim game strips away the layers of childishness to reveal the vicious psyche, conceived in evil and educated in society's sophisticated violence, that lies always within civilized men.

More than a terrifying horror story, Let's Go Play At The Adams' is a compelling psychological exercise of brooding insights and deadly implications.

“No one can bear to know humans and bear being human.”


This is an unpleasant, nasty book. Nevertheless, it was difficult for me to put down. Comparisons have been made to Jack Ketchum’s The Girl Next Door which I haven’t read yet, as both books are apparently loosely based on the 1965 murder of 16-year-old Sylvia Likens. The difference here is that the five children acted on their own, without any adult influence.

After looking at the lurid cover pictured in Grady Hendrix’s Paperbacks from Hell: The Twisted History of '70s and '80s Horror Fiction, I knew I had to find a copy. Copies start at over $80 on Amazon, so I was very fortunate to find one at my local library. I expected low-quality pulp fiction writing, but was surprised what a smart, taut thriller this was. The violence and savagery is understated. What is deeply disturbing and unsettling, however, is observing the children’s behavior and interactions with their captive. Through alternating viewpoints, the reader gets a glimpse into the minds of the children, as well as their 20-year-old babysitter’s physical and emotional suffering.

I was finishing up this book while visiting with my stepdad today. A 10-year-old neighbor came over and brought a few items from the corner store along with his change. I then warned my stepdad about trusting kids with his money and the danger of letting them step foot into his house. He just looked at me funny. When I got home, I side-eyed my 13-year old neighbor who was sitting on the balcony and wondered just what cruelties he was capable of inflicting on the adults in his life.