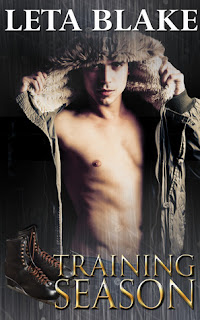 Unquestionably talented figure skater Matty Marcus is willing to sacrifice everything for his Olympic dream, but his lack of discipline cost him the gold once before. Now the pressure’s on. He needs a coach who can keep him in line, but top coaches don't come cheap, and Matty can't afford to stay in the game no matter how badly he wants to win.

When a lucrative house-sitting gig brings him to rural Montana, Matty does his best to maintain his training regimen. Local residents turn out to be surprisingly tolerant of his flamboyant style, especially handsome young rancher Rob Lovely, who proves to be much more than a cowboy stereotype. Just as Matty requires a firm hand to perform his best on the ice, Rob shows him how strong he can be when he relinquishes control in the bedroom. With new-found self-assurance, he drives himself harder to go straight to the top.

But competition has a timetable, and to achieve his Olympic dream, Matty will have to join his new coach in New York City, leaving Rob behind. Now he must face the ultimate test. Has he truly learned how to win—on and off the ice—during his training season?

Matty Marcus is a very talented figure skater, but poor performance and an injury have kept him out of competition. Now he’s short on cash and in order to be able to compete in the next Olympics, he accepts a six-month housesitting job in Montana for a friend of his mom’s. The natural beauty and tranquil lifestyle allows him time to recuperate from his injury and focus on his training without all the distractions of his friends and city life.

Rob Lovely is the handsome next-door neighbor and ranch hand that comes knocking on Matty’s door with an armful of firewood. Even though they are attracted to each other, Matty is preparing for competition and doesn’t need the distraction. But the heart wants what it wants and Matty and Rob inevitably fall in love.

I totally loved Matty’s flamboyant style and charming personality, and I loved how attentive he was to Rob’s 12-year-old son, Ben. But there were a lot of things that irritated me about him. His parents made a lot of sacrifices to get his career off the ground, and to me he took them for granted and squandered his talent. At least now he acknowledges his mistakes and is trying to make up for that.

Rob is a really nice guy, and though I don’t understand his attraction to Matty, he brings stability to their relationship. Their sex scenes, however, left me cold. They were repetitive, lacking in chemistry, and very unromantic. I could have done without the BDSM aspect of this story, as it felt out of character and completely unnecessary. I know Rob wanted Matty to do his best, but I’m not convinced that pain and humiliation is the way to help him achieve his goals or address his self-esteem issues. I also was disturbed that Rob felt he knew just what Matty needed sexually without considering his feelings or getting consent before engaging in high-risk practices.