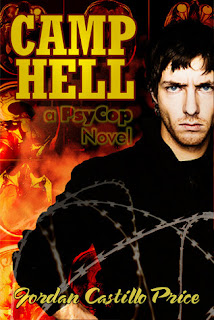 
Victor Bayne honed his dubious psychic skills at one of the first psych training facilities in the country, Heliotrope Station, otherwise known as Camp Hell to the psychics who've been guests behind its razorwire fence.

Vic discovered that none of the people he remembers from Camp Hell can be found online, and there’s no mention of Heliotrope Station itself, either. Someone's gone through a lot of trouble to bury the past. But who?

I really enjoyed the fifth installment in the Psy Cop series, even though it felt a little long in places. Unlike the previous stories, there is not just a criminal case to be solved. Vic is eager to find out more about his past in the psychic training facility known as Camp Hell and enlists the help of a therapist, who helps him recover his memories and also happens to be his ex-lover and fellow “inmate” in Camp Hell. He and Jacob also want to find out who is spying on them and why no records of Camp Heliotrope exist. The always-frisky Crash has a more significant role, as well as Vic’s new partner, Bob Zigler. The paranormal aspect in the story has been turned up a few notches, as Vic begins to use his abilities to their full potential. Even Jacob discovers hidden talents.

Vic’s and Jacob’s relationship continues to grow deeper and the sex is always hot and intense.
Posted by Nancy at 5:00 AM