Madame Bovary by Gustave Flaubert
My rating: 5 of 5 stars

”Before her marriage, she had believed that what she was experiencing was love; but since the happiness that should have resulted from that love had not come, she thought she must have been mistaken. And Emma tried to find out just what was meant, in life, by the words bliss, passion, and intoxication, which had seemed so beautiful to her in books.” 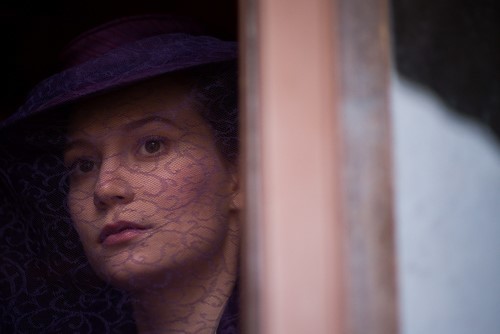 Before she is Madame Bovary, Emma is keeping house for her father on a remote farm. I wonder what would have happened to her if Doctor Charles Bovary had not been summoned to set her father’s broken leg? It is inconceivable to think of her married to a farmer or a tradesman or being swept away by a travelling peddler. She is beautiful enough to be a duchess or a marquise, a pretty bobble for the dance floor, or an elegant adornment for the dinner table, and certainly, the perfect fine drapery for a night at the theatre.

Charles just expects her to be a wife. A woman to manage his household. A woman to uplift him and give him confidence to keep trying to better himself. He is successful in a dull and conservative way, and whenever he tries to raise himself up further, perhaps in an attempt to win the respect of his pretty wife, he is met with utter failure. There is nothing romantic about him. He is steady and completely devoted to her. Whenever he tries to express grand passions, somehow these attempts lack the ability to ignite the flames of desire or evoke the effervescent emotions that her novels tell her are the indications of true love.

Her frustrations, once contained in a heavy ball beneath her heart, begin to unravel like many hissing snakes, and her docile nature becomes viperous. ”She no longer hid her scorn for anything, or anyone, and she would sometimes express singular opinions, condemning what was generally approved, and commending perverse or immoral things: which made her husband stare at her wide-eyed.”

Other men desire her, even Charles’s father, who is a retired army officer and a man of the world, who will take any opportunity to pull her to him in a deserted hallway or tug her into a dark alcove for a reasonably platonic cuddle. Men can sense her dissatisfaction behind the cute dimple of her smile and the twinkling stars in her eyes. She is ripe for the plucking. Being a man well experienced with the betraying beguilement of beauty, I would like to think that I would be impervious to her charms. I would only have to clutch the slenderness of my wallet to realize that a woman of her insatiable need for material things would only lead me to disaster and ruin. Of course, there is this: ”And she was ravishing to look at, a tear trembling in her eye like water from a rainstorm in the blue chalice of a flower.”

Most men will meet many beautiful women in their lifetimes, but of course, the crux of the matter with a woman like Madame Bovary is knowing that with a little effort she can be yours...at least for a time. Two men are led into catastrophic affairs with Emma. These indiscretions prove even more disastrous for her. ”There are souls who endure endless torment? They are driven now to dream, not to take action, to experience the purest passions, then the most extreme joys, and so they hurl themselves into every sort of fantasy, every sort of folly.” Recklessness can prove too exhilarating, even intoxicating, but rarely does it lead to long term happiness.

The other problem that Madame Bovary has is a lack of funds. Her husband makes a good living, but he can not even begin to keep up with her need to possess fine things, or to conduct a lifestyle better suited to an aristocratic pocketbook. This is a theme of particular interest to Gustave Flaubert. In fact, he wrote a whole book called Dictionary of Accepted Ideas, condemning the very worst detrimental aspects of having too much money and not enough curiosity. ”What he despised, really, was a certain type of bourgeois attitude. It included traits such as intellectual and spiritual superficiality, raw ambition, shallow culture, a love of material things, greed, and above all a mindless parroting of sentiments and beliefs.”

An immoral, grubbing moneylender sinks his talons into Emma’s soft pale skin like a blood sucking leech. He takes advantage of her naivete concerning the truth worth of hard currency and plays upon her covetous nature for decadent things. She is so close, with an extended line of credit, to living a life of frivolous fun, buoyed by a series of passionate, heart fluttering affairs, that she can almost see it, almost taste it, and almost believe she can obtain the life she has only read about. As Vladimir Nabokov says, ”The ironic and the pathetic are beautifully intertwined.”

Emma’s mother-in-law believes the books she has been reading are the reason for the faults in her daughter-in-law’s character. ”Wouldn’t one have the right to alert the police if, despite this, the bookseller persisted in his business as purveyor of poison?” I have to admit I laughed out loud. As much as booksellers would like to claim to have diabolical control over readers, we have to defer to the writers. In fact, Flaubert had to defend himself in court for charges of immorality regarding the publication of Madame Bovary. Nothing drives book sales like a court of law trying to deem a book too scandalous for people to be trusted to read it. To me, this book encourages morality and fiscal responsibility. I don’t see how, given the tragic nature of the book, someone would read this book and want to emulate Madame Bovary.

However, I do understand the feeling that some women have of being trapped in a cage, even if it is a gilded one. The responsibilities of life can make one feel the itch to be reckless, unfettered, and pine for romantic assignations that will awaken youthful desires. Maybe this book is more of a how-to manual on how not to conduct oneself with torrid affairs and fiscal carelessness.

This novel is considered the first example of realistic fiction. This translation is 311 pages long. Flaubert had over 4500 pages of rough drafts that this relatively slender volume emerged from. The lyrical nature of the writing attests to the stringent diligence that Flaubert insisted upon to craft each page of this novel.

I couldn’t help, of course, but think of Anna Karenina as I read this book. I read and reviewed Tolstoy’s masterpiece earlier this year. It is easy to condemn both of these women, but who among us has not had destructive desires which we have either indulged in or at least coveted? Both women are fully drawn characters, completely exposed to our critical judging eye, and at the end of the day, deserving of our pity. Either woman would have made a wonderful heroine for a Shakespearean drama. I can hear the gasps from a 17th century audience.

Posted by JEFFREYKEETEN at 10:04 AM