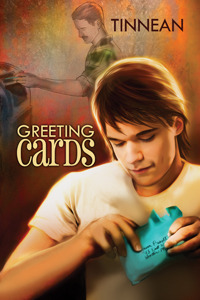 Tinnean
Dreamspinner Press
Reviewed by Nancy
3 out of 5 stars


Holidays are for lovers, just apparently not Ben Haggerty. Not this holiday. After his degree-seeking lover leaves humble blue-collar Ben, Ben spends the Yuletide miserable. He's not accustomed to being alone, not after seven years. Eventually Ben finds his lover's new address and sends him a greeting card asking when he'll come back home—only to learn in the returned correspondence that his card reached the wrong address and another man, Jason Prescott, by mistake.

Jason is touched by Ben's appeal to his lover, and he and Ben spend months growing close as pen pals. Frequently exchanged correspondence turns into weekends spent together, but after learning Jason's working on his second master's degree and is even smarter than Ben's ex, Ben wonders if Jason will be able to love someone as ordinary as he is.

When Ben comes home from a long day at work, he finds the apartment he shares with Rick, his boyfriend of 8 years, strangely tidy and empty. Although Rick’s note promises his departure is only temporary, several months pass without any word from him. Lonely and inconsolable, Ben asks a friend to find out Rick’s address and he sends a card. The card reaches a student named Jason Prescott. Thinking the card was from his sister, Jason is surprised to read a sad letter from a man who is still very heartbroken. So begins the correspondence between Jason and Ben.

I loved the men’s cutesy cards and unique holidays, like Submarine Day, National Goof Off Day, Smoke and Mirrors Day and International Moments of Laughter Day. Their letters were fun to read, but they lacked depth, making their eventual meeting and relationship feel just a little rushed and unconvincing. I liked that both men have very different backgrounds. Jason is working on his second master’s degree while Ben just graduated high school and works as an electrician. I liked the secondary characters, but found Rick very one-dimensional. It was difficult for me to see why Ben was drawn to him at all, much less spend 8 years of his life with such a jerk. A little more tension and heat, and this would have been a nearly perfect story.

It’s a new year and I can be forgiving of these minor flaws which didn’t prevent me from enjoying this lovely, sweet and humorous romance that was just perfect for the holidays.
Posted by Nancy at 7:19 PM