Hungry Ghosts #1 by Anthony Bourdain
My rating: 5 of 5 stars 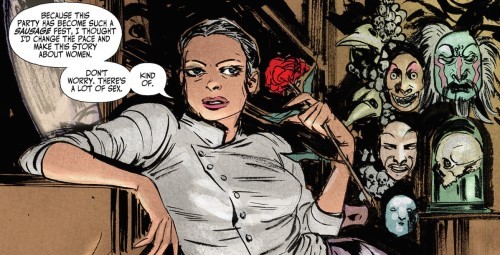 A Russian oligarch, with an unsavory past (are there any other kind?), has assembled a group of international chefs for a night of feasting. Before the oligarch lets them go, he challenges them to play the samurai game of 100 candles. Each chef needs to tell a story featuring demons, ghosts, or revealing other teeth chattering, inspiring, supernatural beings, whose names you do not speak above a soft whisper.

The theme of these stories, of course, revolves around food and revenge, which for those who have followed Anthony Bourdain’s career know he speaks of with reverence often. I might even speculate that some of these tales give Anthony a chance to enact some literary revenge on some particularly nasty individuals he had the misfortune of meeting in his food service days. Only Anthony would know the true targets of his Hungry Ghost revenge, but hopefully, when he saw the proofs of this graphic novel, he chuckled over the eviscerated bodies of some old enemies.

The last correspondence between Anthony Bourdain and his collaborator, Joel Rose, was the dedication for the book.

“This book is dedicated to the memory and enduring allure
of EC Comics and their pre-Comics Code masterworks:
The Haunt of Fear, the Vault of Horror, and Tales from the Crypt
(nee The Crypt of Terror), and their master storytellers:
The Old Witch, the Vault Keeper, and the Crypt Keeper.
May resting in peace not be an option.”

When I was in my heyday of comic book reading, from about age 10-14, I didn’t even know those wonderful horror comic books existed. They didn’t show up on the shelves of my comic book dealer, who also doubled as the biggest drug dealer in the area, commonly called a pharmacist. He had superhero comics by the wheelbarrow load, Archie comics (isn’t Riverdale, by the way, proving to be so much fun?), and fortunately for me, Weird Western Tales, where I was first introduced to Jonah Hex. Unfortunately, EC Comics shuttered their doors long before I was reading comics, so in the late 1970s I would have had to be very fortunate to run across them. It wasn’t until I was in college and working in the used book industry that I ran across a batch of these old horror comics. I took them home and binged them. I was really impressed with the level of writing and the true terror they were able to inspire in me. I wish I had bought them instead of returning them to the shelves of the bookstore, where they disappeared in the blink of an eye into the greedy hands of wild eyed collectors, who were flinging money at us while trying to hide the boners inspired by their unexpected discovery of a goldmine of comics.

Interestingly enough, Joel Rose mentions the influence that Lafcadio Hearn’s book Kwaidan: Japanese Ghost Stories had on the writing of this graphic novel, along with several other books he mentions in the Stirring the Pot essay in the back of the book. I’ve had Lafcadio Hearn on my radar for years, and now with a gentle nudge from Anthony, I’m going to make sure his book on Japanese ghost stories queues up in my reading list this year. 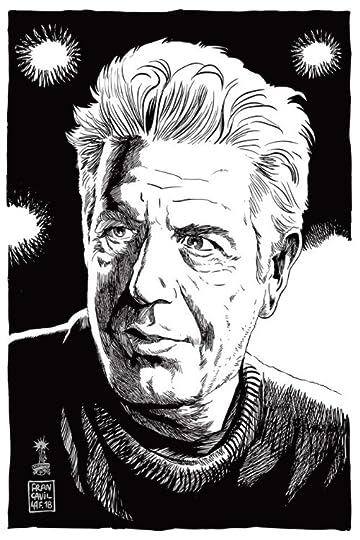 As a bonus, Anthony includes five Bourdain recipes with explicit instructions on how to make these mouth watering dishes in your own kitchen.

Who doesn’t need a splash of Food Noir Horror in their reading schedule, especially with a splash of that acerbic Bourdain wit which frequently had me muttering to myself...I see you Anthony, with your red rimmed eyes and mischievous grin?

Posted by JEFFREYKEETEN at 9:09 AM