The Sky is Dead 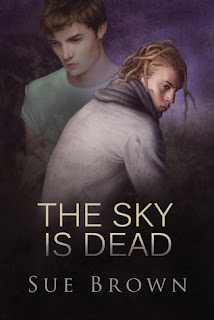 Danny is young, gay, and homeless. He lives in the park, preferring to avoid attention, but when thugs confront a stranger, Danny rushes to his rescue. He and the would-be victim, Harry, form a cautious friendship that deepens months later, when Harry persuades Danny to visit his home. Daring to believe he has found happiness, Danny finds his world turned upside down yet again when tragedy strikes.

Until he runs out of options, Danny won’t trust anyone. Finally he has to accept the offer of a home, and Danny becomes David, but adjusting to a new life isn’t easy. When he meets the mysterious Jack, it stirs up feelings he thought were long gone. Can David dare to allow himself to love? Or will the truth bring his new world tumbling down around him?

16-year-old Danny’s troubles start when he gets caught kissing his boyfriend, Steve, on New Year’s Eve. His father beats the crap out of him and his parents promptly throw him out of their house, forcing him to stay with Steve. Steve’s parents don’t let him stay long and off he goes to a halfway house, where he has his possessions stolen by his homophobic roommate. Danny still runs into Steve in school, but now he has a girlfriend. His heart broken, and unable to control his anger, he breaks his roommate’s nose.

Now he’s living on the street sleeping on cardboard boxes. He goes to the drop-in now and then for food and conversation. The social workers and volunteers want to help him, offer him space in a shelter, get him to take some courses, and provide hospital care when he catches pneumonia from sleeping rough. But Danny doesn’t want to follow rules and has a difficult time trusting others, so he continues to live in the park.

His friendship with Harry starts tentatively, when Harry is getting taunted by bullies in the park and Danny comes to his aid. Harry brings food and they begin spending a lot of time together. The walls Danny built up gradually start to come down and Harry learns first-hand what it means to struggle every day to survive.

Danny’s life takes a turn for the worse when he learns Harry is gone, survives a vicious assault and is hospitalized yet again with pneumonia. He’s approaching 20 now and living rough has really taken a toll on him. He is fortunate to encounter two strong-willed women who want to help him get a fresh start. For Danny, starting over means changing his name to David. He wants to put his past behind him, even keeping it from the man he meets and grows to love.

Even though there is a love story at its heart, this is a sad and realistic tale that explores youth homelessness that results from homophobia. My younger brother was thrown out of my parents’ house shortly after he turned 17, no thought given to his future. He was made to pack his clothing and given one week to move out. Fortunately, I was already living on my own and was able to give him a place to stay. Granted, the apartment was tiny, the neighborhood undesirable, and he had to sleep on the floor, but it sure beats living on the streets. He stayed with me for a year, until he saved enough money for his own apartment and graduated high school. If he didn’t have any support, I can’t imagine that his life would have turned out much better than Danny’s did.

This was almost a five-star read for me. There is a plot twist that nearly ruined the story for me, but I won’t elaborate about it here. Despite this flaw, this story is well worth reading. The cover and title are perfect too.
Posted by Nancy at 7:30 PM