Turner Classic Movies: Must-See Sci-fi: 50 Movies That Are Out of This World 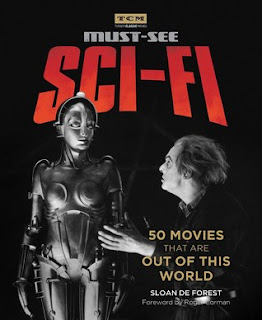 Spanning nine decades and branded by the most trusted authority on film, Turner Classic Movies: Must-See Sci-Fi showcases 50 of the most shocking, weird, wonderful, and mind-bending movies ever made.

From A Trip to the Moon (1902) to Arrival (2016), science fiction cinema has produced a body of classics with a broader range of styles, stories, and subject matter than perhaps any other film genre. They are movies that embed themselves in the depths of the mind, coloring our view of day-to-day reality and probably fueling a few dreams (and nightmares) along the way.

In Turner Classic Movies: Must-See Sci-Fi, fifty unforgettable films are profiled, including beloved favorites like The Day the Earth Stood Still (1951) and Fantastic Voyage (1966), groundbreaking shockers like Planet of the Apes (1968) and Alien (1979), and lesser-known landmarks like Things to Come (1936) and Solaris (1972). Illustrated by astounding color and black-and-white images, the book presents the best of this mind-bending genre, detailing through insightful commentary and behind-the-scenes stories why each film remains essential viewing. A perfect gift for any film buff or sci-fi fanatic!

This was a fun book and a basic introduction to a wide range of classic science fiction films from as early as 1902 to as recently as 2016. I’m thrilled that three of my all-time favorites, Star Wars, Logan’s Run and Woody Allen’s Sleeper, made this list. Since I’ve already seen them multiple times, I will spend some time catching up on those movies I haven’t seen yet, those I viewed only once as a child, and those I enjoyed enough to see again. I’m also thrilled that there is a solid representation of foreign films.

Here is the list of movies to watch before I die:

This book is sturdy, well written, and the photos are outstanding. I especially enjoyed the “Far-Out Facts” and “Mind-Blowing Moment” sections. During one of the most intense scenes in The Fly, Vincent Price and Herbert Marshall kept laughing during the filming. A few years after the release of A Clockwork Orange, Malcolm McDowell was introduced to Gene Kelly at a party. Kelly looked at him and quickly walked away. As if that wasn’t enough, McDowell also suffered an eye injury from the metal eyelid clamps he had to wear.

This is just a minor complaint, but I would have liked a little more in-depth analysis of the films. As it is, the book is perfect as a short introduction to the films within.

Recommended for classic movie and science fiction fans.
Posted by Nancy at 8:09 PM