In “Terminal Alliance”https://www.amazon.com/dp/B01N0232CC/ref=dp-kindle-redirect?_encoding=UTF8&btkr=1, Jim Hines sensational space opera, a motley crew of bio-engineered janitors is forced to step up and save the universe. After a bio-weapon decimates the alien Krakau command crew on the space cruiser EMCS Pufferfish, Marion “Mops” Adamopoulos, the senior, and very smart, janitor, and her small crew of cleanup specialists thwarts the savage alien Prodryan’s plan for universal conquest, while learning the truth about what caused humanity's descent into feral cannibalistic behavior on Earth (hint it was not because of something humans did, there was an outside agency involved) and simultaneously having to figure out how to pilot and defend the ship in space battles. While Hines milks the entire janitor motif to the hilt, he combines a sharp wit and sly humor as he skewers a lot of sf tropes in this super fun read.   We need more books like Terminal Alliance in science fiction.

“Terminal Uprising”, Hines humorous follow-up to the terrific “Terminal Alliance” continues Mops and her crew’s adventures. Now free from Krakuan dominance, Mops and her crew are piloting their stolen space cruiser, the Pufferfish, but running into issues with supplies.  Admiral Pachelbel, a Krakuan, who wants to do the right thing has provided information to Mops, which requires them to  pick up Cate, a Prodryan lawyer, with all the nasty lawyer tricks, with a secret agenda (and everyone has a secret agenda).  Pachelbel wants Mops to go back to Earth, which is guarded by the Krakua space force, because there have been sightings on Earth of non-feral humans. During her trip to get Cate, Mops slyly defeats an Krakua armada trying to capture her ship with another awesome display of alien anatomy and janitorial knowledge.

Continuing their journey to Earth, Mops continues her talent for milking all of the alien races fear of human warrior talents.  One of the story elements of Terminal Alliance is that the Krakuan's bio-engineered most humans into ferocious unstoppable space warriors, who they have been using to dominate the universe.  While they breach the Krakuan space barrier surrounding on Earth, Mops, Cate, Monroe and Wolf, one of her crewmates, and a woman who really wants to be a warrior, if she only could shoot straight, get to the surface, but lose their shuttle, while the rest of the crew hide in space.

On Earth, Mops and her cohort find the non-feral survivors living in fortified underground towns.  Its not that people have found a cure.  Some people were just immune from the bio- weapon that decimated Earth's populous.  But Mops and her crew and the earthlings come under attack from Krakuan forces illegally on Earth.  It seems like there is another secret plot afoot to keep the Krakuans in power.  Since Mops crew defeated the Procydans, the Krakuans think they need help to stop the surging Procydans from destroying the universe.  In the ensuing confrontation, the human survivors of Earth and Mops ragtag group of janitors will have to use all of their wits and strategically placed cleaning supplies to defeat the Krakuan traitors.There are some very good scenes here.  Confrontations between Mops and the evil Krakuans and between Wolf and the earthlings.  Wolf does a lot of growing up.


Besides Hines' witty prose and humor, what made Terminal Alliance such a fun read was three things - the juxtaposition of Mops lowly janitor position with the saving the universe plot, the likability of the characters and a fast moving adventure story set in different alien locations. In Terminal Uprising, Hines shifts the setting to Earth, and away from space battles, and the action involves a whole new group of characters. There is less journeying around the universe meeting new aliens and more stationary settings. I think this detracted a bit from the freshness of the first book.  Maybe it’s just hard to still milk the same jokes as is the first novel. But I think it’s also hard to strike lightning in a bottle. This is a really good novel, a fun read that will keep you fully engaged, and for a second book in a trilogy it more than holds its own against other books out there. Its just not as fun a read as Terminal Alliance. 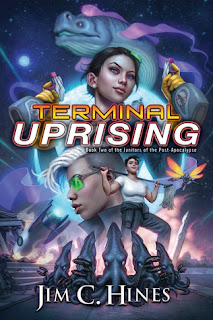 But it’s definitely worth a read. I would follow Mops anywhere.

In the crowded field of fantasy, paranormal superheroes and fantasy mystery mashups, it’s good to pick up a fun witty sf space opera novel filled with likable characters and humorous situations. Snap up the pair.
Posted by Jeffrey Wendler at 6:34 PM