Nick Petrie's "Tear it Down" is a A + thriller

Nick Petrie's fourth Peter Ash novel "Tear it Down" cements his "go to" status for that certain type of strong warrior action adventure thrillers—that is the a good guy fighting against the bad guys. His novels are non-stop action. Occupying some of the same territory as the oft compared, but little duplicated "Jack Reacher" novels, Peter Ash uses his unique skill set and friends to help people who are facing troubles and to right wrongs. There is an innate moral code underlying these novels.
Good people beating back bad. And in Peter Ash, Petrie is not afraid to break laws so that the "right" people – that is good people- win out against murderous thugs, racist killers or gangs who are threatening them. And in “Tear it Down”, the multi-racial setting is an ideal location because Petrie gets to show another part of our multi cultural country to good effect.

If you are new to the Peter Ash canon, he is an ex-soldier who returned from war overseas with some unique warrior skill set and a problem with enclosed places. When he spends too much time in buildings, the “White Noise” builds up and causes him problems. But he can also harness the White Noise to reveal the skills of a warrior. Hyper fit and blessed with some great fighting techniques, Ash likes to build and repair buildings and people's lives. Currently living with his girlfriend June Cassidy, he has gotten his bruised and battered body back in shape from his last escapade, and has rebuilt all of Cassidy's homestead. She easily recognizes that he needs a new cause. She sends him to multi-racial Memphis to help her friend Wanda, a black combat photographer, who has been getting threatening calls.

When Ash gets to Wanda's house, he finds that someone has escalated the threats and driven a stolen dump truck into her living room. But Wanda has escaped harm and is not ready to leave. Ash tells her he will help fix up her place and also help protect her from the outside threats. Wanda is also suffering some unknown war related problem and is consuming multiple drugs to combat it.

While gathering supplies, Ash is waylaid in his truck at a gas station by a Eli Bell, a guitar playing teenager. It seems the Bell, who has a talent for music and planning, was involved in a 4 person jewelry store robbery at a local mall that went south, and while he escaped with the loot, others were not so lucky. Although Ash could stop him, he feels for Bell and lets him take his truck, but regrets it immediately. On the way back from the hijacking, Ash is grabbed up by King Robbie, Memphis’s reining drug kingpin, who puts Ash in his fortified Mercedes and questions him about Bell. With King are Charlene Scott, King’s shooter and Adrien Brody, his man mountain muscle.

On the way back to Wanda’s, Ash sees some murderous thugs using a machine gun to shoot up her house. With nary a delay, he grabs a forcibly grabs a gun from Charlene, and runs out to stop the thugs. The thugs are Judah Lee, a white supremacist killer who just got out of jail and his hog killing brother Albert. The brothers are hell bent on getting the house from Wanda because there is an old family story of buried loot in the house.

The stage now set, the action picks up even more. There a confrontation with another drug dealer which ends with Ash with a gun. Ash almost catches Eli Bell. King Robbie is not done with Ash and Judah Lee, is a crazed homicidal killer. Ash has to call for reinforcements, and his friend, Lewis, comes south. Lewis is handy with a shotgun and is game for business. Locked and loaded, Ash and Lewis will have to protect Eli Bell and Wanda and put a stop to the killing.

There will be a confrontation with King Robbie’s crew who Lewis and Ash brace in their hideout and a highway battle with Albert and Judah Lee which culminates in a hand to hand battle.

It’s a tough world, but a good man and his friends can make all the difference. 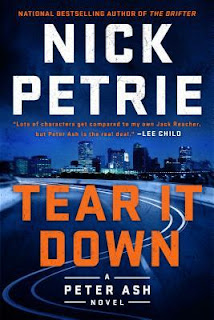 Posted by Jeffrey Wendler at 5:51 PM