The Other Man: 21 Writers Speak Candidly about Sex, Love, Infidelity, & Moving On 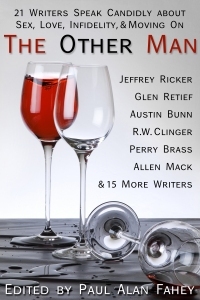 Who is the other man?

He’s an accident waiting to happen: the skateboarder round the bend, the smiling barista with the extra hot mocha, the computer geek eager to retool your mate’s hard drive. He’s a relationship gatecrasher bound by no rules and with no sense of fair play. Like Caesar, he comes, he sees, he conquers. On the flip side, you or I can be the other man, charging in and breaking the bonds of a committed relationship without a thought to the pain and misery inflicted upon the injured parties. Face it: We’re not all innocent bystanders in other-man scenarios.

The Other Man is an artistic collaboration by and about gay men and their relationships. If you’ve ever been the other man, had him invade your life, or are just plain curious about this beguiling, unpredictable and dangerous creature, then this anthology of personal essays is for you. Twenty-one of our most acclaimed authors, many Lambda Award winners and finalists, write candidly about either being the other man, suffering the other man or having their relationships tested by infidelity. What they tell us is we must take heart, it does get better and one day our luck is bound to change. We’ll survive the bumps and detours in our relationships and weather the storms, or resolve to move on. Along the way, we’ll hope to meet someone new and simpatico, maybe even our long-awaited soul mate. Life will be good again. Or will it?

A portion of the proceeds from the sale of this anthology will go to the It Gets Better Project.

I was ecstatic to get the opportunity to read this collection of stories, especially since Rodney Ross, author of The Cool Part of His Pillow, is one of the contributors, and I really loved his first book.

Each of the stories in this collection is deeply personal and candid and offers different perspectives on infidelity. Human emotions are very complex and relationships are hard work, requiring commitment from both partners. Life is full of unexpected changes and I really enjoyed reading these struggles to adapt and grow in spite of relationship difficulties.

Even though this collection focuses on gay relationships, there is something in here for everyone, regardless of gender or sexual orientation.

Jeffrey Ricker explores online dating after he had his heart broken in What If?. The relationships with men looking for something on the side were fun, but he wants more.

In The Rival With a Thousand Faces, Glen Retief is living with the love of his life in Spain, but learns that living with a deeply closeted man who is away from home a lot and has secrets of his own can be as difficult as coping with the difficulties of living in a foreign country. I loved the literature references and need to read Graham Greene.

Stung and humiliated by his last cheating boyfriend, Jason Schneiderman now plays hard to get in The Hat Prize. He learns his new date, Michael, has a boyfriend, but they enjoy each other’s company. Since Jason didn’t have to worry about falling in love, his relationship with Michael proceeded naturally without having to deal with all the pressure and awkwardness of a first date. Very sweet story.

In Husbands, Austin Bunn left his boyfriend when their education and careers took them separate ways. He discusses his affairs with married men, the advantages and disadvantages, at the same time exploring their motives and discovering more about his inner self and his own needs.

R.W. Clinger's In the Brokenness of Summertime explores the effects of infidelity on a long-married couple. The anger, hurt and guilt pouring from the pages was just heartbreaking. This is an intense and unsettling story, but the ending made me giggle.

In Any Resemblance to Actual Persons, Living or Dead, Is Entirely Coincidental, Tom Mendicino describes his own experience with Hal, a married man looking for discreet sex with men on the side and how he was the inspiration for a character in his first novel.

Mark Canavera learns that his lover, Ousmane, is having a virtual relationship in Complicity. He remembers his own affair that occurred just a few months before and even though Mark’s transgression was worse, the impact is the same. Will they be able to forgive each other? I liked the glimpse of life and troubles in West Africa.

In Turbulence, Chuck Willman shows how lies and deception impact everyone involved.

Some people think that it’s perfectly acceptable to “fuck around” during periods of extended absence. Of course, for such relationships to work there has to be openness, honesty and a set of ground rules. Allen Mack’s Just Wally and Me was a lighthearted, warm and funny story that made me smile.

Rob believes he’s an actor, even though he hasn’t worked in many years. Infidelity can break hearts…so can unfulfilled dreams. David Pratt’s Way Off explores the challenges of professional acting and a relationship in turmoil. This was a very sad story.

Morris Hartman is a lawyer…and a huge fan of author Perry Brass. He’s also straight, married and in the process of coming out. Perry is intrigued by this man, even though he has had disappointing experiences with fans in the past. They meet and have an affair. It’s not so simple. A Pitiless Love uncovers the emotional pain that can be suffered by the one who cheats.

Paul Alan Fahey’s Where Are You Going To? shows how the music you listen to can define special moments in your life.

I loved Jeff Mann’s Thomas. This is a really sad and lovely story that explores a man’s overwhelming pain and emotions from loving someone who doesn’t love him back. Time does not always heal wounds.

In Erik Orrantia’s Ballad Echoes, Erik feels responsible for taking care of his HIV+ lover even though their love has died. He falls for another man who is not so perfect either, but he manages to learn from his mistakes and move on. Relationships can never be perfect, because people are not. I hope Erik is happy.

In Philip Dean Walker’s The Other Side of the Game, Phil has had his eyes on a buff dude at the gym for over two years. He has a vibrant online life and a boyfriend, but that doesn’t stop Phil from making a date with him. The two men have an affair while Drew’s boyfriend is studying abroad. The boyfriend returns, but Phil is unable to let go.

In the sexy Three’s A Charm, Wes Hartley talks about how he met his 16-year-old boyfriend, Riley, while he was in a relationship with the boy’s uncle, Ronny. Riley is not out yet, and is looking for a sexual mentor. This consists of no more than friendly head and sleepovers. Once Riley gains his confidence and skill, he comes out to his uncle and meets Tanner, a hot number close to his own age. The sleepovers continue…

Lewis DeSimone conveys the intense passion and overwhelming emotions of first love in Last Tango in Cambridge. This is a beautiful and heartfelt story.

William Henderson’s You Without Me is a very intriguing story told in the second-person point of view about an unhappily married man who does not reveal this fact to his new lover. His lover slips back into old ways. I liked the intimate feel of this story.

Rodney Ross and his partner have been together 30 years. In And Then There Was One, he tells amusing tales about the couples they know whose relationships failed. Wisely, they have chosen not to take sides.

Felice Picano’s The Child, is not about a child at all, but about a man who was the author’s partner’s “other man.” In the 70’s, gay relationships were open until HIV began to change things. This story deals with illness, death, grief and the messiness associated with it.

In A Brief History of the Divorce Party, the party was originally a holiday party until Rob Byrnes’ partner announced he was in love with someone else. It doesn’t have to end up badly. Time passes and life changes. Couples who have had history together can still be good friends and learn from their mistakes.

I enjoyed every single one of these personal stories and loved how they explored the complexities of relationships with humor, warmth and sensitivity.
Posted by Nancy at 9:30 AM