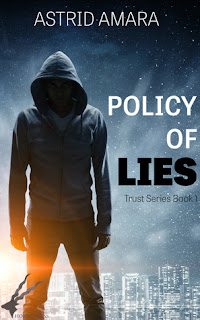 Twenty years ago, Levi Kaszeri survived a brutal rebellion on the mining colony of Tarus 9. Now as an aspiring reporter, Levi has a mission: to expose the massacre to the public, and bring the men responsible to justice.

But after a violent attack, he is rescued—then seduced—by Tiergan Seoras, a young doctor with a dangerous past and a slave tattoo.

Soon Levi finds all of his investigations leading him back to Tiergan. And he begins to fear that the best lover he's ever had may also be his worst enemy.

I bought this title because I so thoroughly enjoyed Astrid Amara’s fun, sweet, humorous and romantic stories in Tangle.

The fun begins when investigative reporter Levi Kaszeri is walking through the worst district in the city to collect a piece of evidence, a memory implant he needs to complete his story of a massacre that took place on Tarus 9, a mining colony where Levi spent his childhood and where his family was brutally murdered. He is attacked by a mugger and promptly rescued by Tiergen Seoras, a gorgeous doctor with many secrets, who runs a free clinic nearby. Their attraction is instant, and Levi finds his growing relationship with the doctor is complicated by what his investigations reveal.

There is much to like about this story. I loved the future setting and independent space colonies with domed biospheres and simulated seasons. I loved the exploration of corporate crime and abuse. I loved the fast pace and suspenseful scenes and the well-drawn secondary characters.

What frustrated me most was the character of Levi. I expected a bit more “street sense” from someone who managed to survive a brutal massacre as a child and is now working as a reporter which requires a certain amount of discretion and common sense. I was able to figure out who the bad guys were long before Levi did and I really wanted to strangle him for his stupidity. He was so obsessed with revenge for his family’s murder and his sex life that he failed to see there was another side to the story at Tiergan’s peril.

Despite its flaws, I found this story difficult to put down and look forward to more of Astrid Amara’s work.
Posted by Nancy at 3:00 AM