The charming "Kingdom of Exiles" by Maxym M. Martineau is a winning fantasy 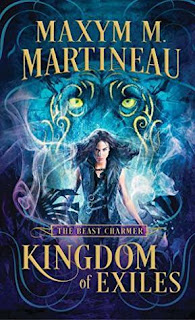 “Kingdom of Exiles” by Maxym M. Martineau is a captivating fantasy with interesting characters, good world-building , magic, and a brooding romance that heats up over time. Leena is a Charmer, with the rare magical gift to enchant magical animals and monsters.  She is in exile from the Charmer homeland of Hireath. A victim of an unscrupulous member of the Charmer Council.  She is forced by circumstances to sell her captured monsters, a crime in Hireath. She is in the midst of such a sale, when she is accosted by a member of the Cruor, a group of undead assassins, hired to kill her by someone from Hirearth.

Used to bartering in the world outside of Hirearth, Leena barters with Noc, the male guild master of the Cruor; she will give four assassins a magical beast in exchange for their termination of the assassin contract.  It’s a good bargain, but as with any bargain, it’s the unwritten rules that get you, and Noc holds back a major catch, that unless Leena dies, he will die.

The story alternates between Noc chapters and Leena chapters so we get two perspectives of the action.  Leena’s charms as a Charmer and a woman soon come to captivate Noc and the other members of the assassin group, and Noc is soon entranced. Leena is running from her demons, an evil Charmer, who used one of Leena’s monsters against her, but Noc is running from death, his death and the death of countless others, caused by a curse that he bears, that even dying and being reborn as a Cruor has not vanquished.

Martineau’s depiction of the magical forces in the novel shines.  The Cruor have magic, the guild leader can revive dead people and once a member of the guild, the assassins can become shadows, vanish and reappear, and move incredibly fast. Noc, has his own powers as well.  However, Martineau powers up the appeal of the novel with her magical creatures, who come alive on the page. Form the amorphous Iky, a short timer from the beast realm, but an invisible creature able to grow limbs and become solid to the Gyss, a magical creature, who grants wishes but claims a powerful penalty for each.

But the story is not limited to Leena’s creatures. There are some cool battle scenes.  Leena ability to discern which creature will suit each of  the assassins on the quest and gifting of them. There is also the budding romance between Noc and Leena.

Noc, however is looking for his own beast, because he wants the curse lifted.  But Noc does not want to love Leena because of his curse, but he cannot kill her because of his attraction to her and hope that he can lift the curse.

For a book about a quest with assassins, they come off as honorable and likeable. It is Leena’s past that catches up with them and Leena and Noc will have to join together to defeat the evil Charmer bent on torturing Leena into submission.

This charming novel should be on your short list for the summer.

Posted by Jeffrey Wendler at 11:59 AM