Nick Stefanos Goes Down to the River 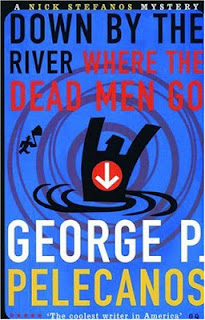 
First published in 1995, this is the third and final installment of George Pelecanos's series featuring Nick Stefanos. In the opening book,A Firing Offense, Nick left his job at Nutty Nathan's electronics store and got his license as a P.I. But as this book opens, Nick, who has a major drinking problem, is supporting himself by tending bar at The Spot, a somewhat less-than-genteel establishment. Being a P.I. is still something of a sideline for Nick.

At this point, Nick is dating a woman probably better than he deserves and who is also developing a significant problem with booze herself. Needless to say, Stefanos is not the best influence in this regard. One night, Nick goes on a hellacious bender and winds up dead drunk, down by the Anacostia River. During the course of the night, a car pulls up near the spot where Nick has passed out. He awakens sufficiently to hear two men drag a third out of a car and shoot him. Nick can't raise his head high enough to see either the killers or their car, but he is alert enough to deduce from the sound of their voices that one of the killers is white, the other black.

The next morning, Nick finally awakens and stumbles down to the riverbank where he finds the body of the victim, a young black man. He makes an anonymous call to the cops, reporting the killing, and then beats feet.

The cops are convinced that it's a drug deal gone wrong or perhaps a gang killing and they don't appear to be putting a lot of effort into solving the case. But Nick knows that it's highly unlikely that a black man and a white man would be cooperating in either scenario. The killing has sobered him, at least temporarily, and he decides to investigate the crime himself.

As is usual in a novel by George Pelecanos, the major force in the book is the setting and atmosphere that he creates. The seedy underside of Washington, D.C., where virtually all of his books are set, comes alive and is vividly rendered. You can feel the poverty and despair, smell the cigarette smoke, and practically taste the liquor.

As always in a Pelecanos book, music plays a key role, and hardly a page goes by that does not find Stefanos listening to one musical group or another, a great many of whom no one else has ever heard of, and at times it can seem like Pelecanos is simply showing off in this regard, effectively pointing out to the reader that he is cooler and way more hip than the reader could possibly ever be.

But this is a small complaint about a very good book from a writer early in his career who would only grow more talented and produce even better books in the years to come. It should appeal to any reader of crime fiction who likes his or her action down and dirty and who understands that in real life, sometimes there are no happy endings.
Posted by James L. Thane at 2:58 PM