Taking a closer look at King's short and sweet side


Master storyteller and bestselling author Stephen King is known for his doorstop length books; in fact, it's something the critics love to lambast him for and King himself has referred to his condition as "literary elephantiasis". All I know is, you could really mess someone up with a few whacks across the head using the hardback edition of IT or the uncut edition of The Stand. Today, I want to take a step back from the epic novels that double as concealed weaponry, and throw a spotlight on King's short but sweet ebook experiments. 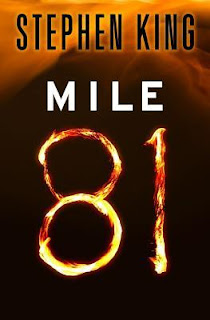 Many readers have been underwhelmed by this one: too short to be a novella, too long to be considered a short story, King fans have been left feeling he'd written a tepid, and ultimately forgettable, little piece. The reception has been split though, because many other fans enjoyed it immensely. I am lucky enough to fall into the latter category.

Even before picking it up I was predisposed to love it. It's King after all, and it had been a while since I'd been able to indulge in my addiction. You could also say this story acted as the prime motivator for me to finally get myself an eReader, seeing as how Mile 81 was only released as an ebook and I wouldn't get to read it otherwise.

Because a car features prominently in the story, comparisons have been made to Christine and even From a Buick 8. I wasn't really reminded of either of these though. If it felt familiar it was because it got me thinking about King's short story “The Raft” (from Skeleton Crew), which I adore and find myself re-reading every few years. Like the mysterious oil slick in that story, the car in Mile 81 just appears out of nowhere. Where it comes from, how or why it got there, doesn’t matter so much as what happens next.

The story instantly engrossed me as did the cast of characters who all find themselves arriving, for one reason or another, at the deserted Mile 81 rest stop. King makes it look all so easy – the abandoned building is the perfect setting for a malevolent force to set its web and draw in all the victims it can. Almost immediately, we know there is something sinister afoot (it is King after all), but it isn’t immediately obvious from what direction the threat is going to come from. It’s hard to steel yourself when you don’t have that vital piece of information. The subsequent dread this creates is palpable. Then, when you finally know where the danger is coming from, the dread doesn’t cease, but escalates exponentially; by this time we have characters to care about and it becomes that desperate feeling of “watch out! Oh no! Don’t do that!”

Do I think this is the best thing King has written? Of course not. But I do think it’s memorable. It tickled my heebie-jeebies bone and left me wanting more. Whenever I’ve been away from King for a while and I finally get to read something new, it is the best feeling in the world (like slipping into my beat up old Levis or that ancient pink sweater with holes I can’t seem to throw out even though my boyfriend has threatened to burn it). It’s comfort. It’s coming home. It’s sitting down with an old friend. I felt all of those things reading this little gem, and I hope if you do pick it up, you’ll feel some of that too. 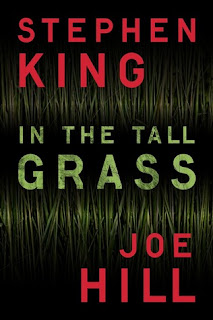 Well, well, well, what do we have here? A bona fide horror story my friends and Constant Readers, sprouted from the father/son imagination team of Stephen King and Joe Hill. This story is not without its problems (and won't be suited to everyone's tastes). It is ghoulish and a tad gory, and depending on your sensibilities you may be disgusted, even offended. But before it goes there it is a magnificent piece of storytelling steeped in dread and what I like to call, epic creep. One reviewer has likened it to Open Water meets The Ruins and that's not inaccurate. There is a Mile 81 vibe as promised, but I was reminded more of King's earlier classic short stories such as "Children of the Corn" and "The Raft" and if I had to pick a movie, The Blair Witch Project.

Getting lost in tall grass is one of my most primal fears. And I don't mean grass that comes up to your waist (icky enough), but grass that is over your head and obscures the view of what's in front of you. Stuff lives in grass. Entire ecosystems of crawly, stinging biting things. Then there's mud and dew and pollen and mice and snakes and well... you get my point. I don't want to be there. No way.

The first half of this 60 page short story is so very strong in the way it taps into our claustrophobic fear of becoming lost. As humans we are very good at -- not to mention very attached to -- knowing where we are at any given moment in space and time. Our evolutionary sense of well-being depends on it. Strip it away and we quickly lose our shit. Panic, fear, frustration, they all come bubbling to the surface as we projectile rage against the environment that has conspired against us in such an unforgivable betrayal. What is that tree doing there? That wasn't there before. I thought the river was to the east of us. I'm sure the car is just over the next hill there.

As much as we hate it, getting lost is pretty much a universal human experience. It's probably happened to all of us at one time or another, even if it was for a very short period of time in a new city or on a short hike in a national park. King and Hill take that germ of an idea and run with it like mad lunatics in an asylum. This is a supernatural horror story, so if you like realism and stories that "could really happen" this might not be your thing. I wasn't entirely satisfied with the explanation of what is really going on in the tall grass, but enjoyed the first half of the story so much I'm willing to overlook that here. Plus, the story is just so well-written. It's tightly coiled prose with some great phrasing and sentence structure.

Imagine being a fly on the wall for the father/son conversation such a collaboration requires. There are a few things that happen that made me want to scream: "Okay, whose idea was that?! Fess up!" I guess part of the fun is in trying to guess, and perhaps never knowing. These guys work good together though, and I'm looking forward to many more collaborations (fingers crossed).
Posted by Trudi at 10:58 PM