A Prequel to "Savages" 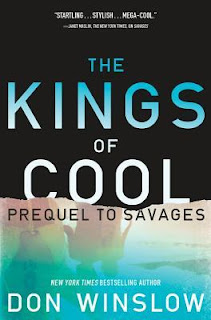 By James L. Thane
Four out of five stars


One of my favorite books of the last several years was Savages, by the incomparable Don Winslow. It was hip, cool, very funny and enormously engrossing. The trio at the heart of the book included three early-twenty-something Southern Californians: Ben and Chon, two life-long friends-turned-drug producers who grew the best weed available, and O, the enormously beautiful and appealing woman who loved both of them. The book was not only a great read, it was a compelling meditation on the nature of friendship, family and love.

Winslow now returns with The Kings of Cool, a prequel to Savages that shows how Ben, Chon and O came to know each other and how they grew into the people they would ultimately become. It is at least as good, if not better, than Savages.

As the book opens, Chon, who is still a Navy Seal, is headed back to Afghanistan. Ben has just received a visit from a mysterious man who wants to cut in on the profitable dope business that Ben and Chon have established. Ben, a pacifist at heart, chooses to deal with this problem in his own way and does not to tell Chon about this threat to their livelihood. He figures that Chon has enough on his plate as it is. Meanwhile, O's mother PAQU (Passive Aggressive Queen of the Universe) is on O's case, insisting that she either get a job or go back to school.

From that point, the book bounces back and forth between the present day and the counter-culture SOCAL of the 1960s. As Ben, Chon and O deal with their respective problems, we meet a group of surfer dudes, hippies and people involved in the early days of the dope business, which at that point, simply involved moving grass into Southern California and selling it.

Over time, of course, the early days of the counter culture will evolve into something entirely different while back in the present day, the threats to Ben, Chon and O will grow increasingly complicated. Winslow weaves his way through these narratives brilliantly and you simply cannot put the book down as one surprise after another unfolds. The writing itself is inventive, as it was in Savages, and ultimately, the book ends way too soon.

I'm not a huge fan of the movie that was made from Savages and I sincerely hope that people who were not all that thrilled with the movie will still give the book a chance;it's a great read, infinitely better than the film, and I can't imagine that anyone who thrilled to the book will not want to read The Kings of Cool as well.
Posted by James L. Thane at 8:24 PM