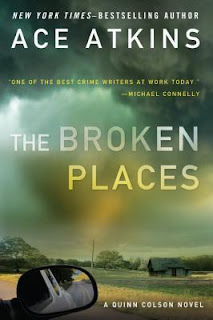 The Broken Places
by Ace Atkins

Reviewed by Kemper
4 out of 5 stars.

I guess Ace Atkins gave his publishers some kind of Buy-One-Get-One-Free deal because he released two new books in one month this year. His generous nature is good news for fans because Wonderland showed again that he was the right writer to give us more Spenser while this one adds even more depth to his Quinn Colson series.

Quinn is a former US Army Ranger who saw extensive service in Iraq and Afghanistan before returning to his Mississippi hometown and becoming the county sheriff. After a year on the job, Quinn has the department set up the way he wants, but he’s got a problem caused by a recently released convicted murderer.

Jamey Dixon was sent to prison for killing his girlfriend, but he was freed as part of a large group of pardons issued by a corrupt governor leaving office.  Most of those who got out were the result of money or influence, but Dixon had neither so no one can figure out why he was released.  The family of the murdered woman keeps coming to Quinn to do something, but his hands are tied.

The situation is made stickier because Dixon has started dating Quinn’s sister.  Caddy Colson had left town and became a drug addicted stripper, but she returned as a born again thorn in her brother’s side.  Dixon found Jesus in prison and has started a homegrown ministry that is gathering support.  Caddy believes that Dixon had been railroaded and is angry that Quinn and others in the town want nothing to do with him.

When two convicts escape prison, they head for the loot they had hidden from an armored car robbery, and they’re convinced that Dixon, who had learned of the money while doing time with them, may be going for the cash himself.  Complicating the manhunt is a huge storm that is deluging the county with rain and the possibility of tornadoes.

This series is just getting richer and deeper as it goes as Atkins expands the world of Tibbehah County.  Unlike some writers who either try to sentimentalize rural life or sneer at it, Atkins conveys the rhythms of a small town with easy authenticity. Living in a place where you have some kind of history with almost every other person makes for tangled relationships, and the main character is a prime example of that.

On one side, Quinn has a grief stricken family asking for justice he can’t provide while his sister is stubbornly refusing to consider even the possibility that Dixon might not be the reformed man he claims to be.  Quinn also has to deal with the politics of running a sheriff’s department, and he’s locked in constant battle with his nemesis, a corrupt county commissioner.  The town is also buzzing about a potential romance between him and the woman who runs the funeral home, and she just so happens to be the sister of the woman that Dixon killed.  Quinn also still has some unresolved feelings for his old high school sweetheart who is married to the town doctor.

It’s the blending of this small town world with a first rate crime story that is making this series a must-read.  The two escaped convicts and their quest to retrieve their stolen loot kicks off a chain of events that will further complicate Quinn’s life.

Some readers may be a bit frustrated that there are several elements that aren’t resolved here and will apparently carry over to the next book, but Atkins has delivered another great entry in the Quinn Colson series while setting up potential plots that should make this series intriguing for a long time to come.

I got to meet Ace Atkins and some other crime authors a few months back.  Read all about the encounter here.
Posted by Kemper at 6:00 AM