Another Excellent Read from Martin Limon 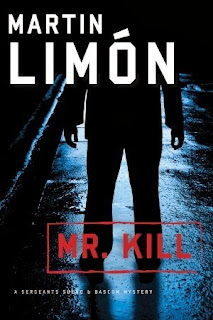 
Over the last few years, I've become a huge fan of Martin Limon's series featuring Army CID Investigators, George Sueno and Ernie Bascom. Like a lot of other good crime novels, the characters are engaging and the stories are entertaining and compelling. But what makes these books so special is the setting, which is unique in crime fiction.

Sueno and Bascom are with the 8th United States Army, stationed in Seoul, Korea, in the middle 1970s And in addition to being excellent thrillers, the books provide a very interesting glimpse into the Korea of that time, into the inner workings of the U.S. Army stationed there, and particularly into the complicated relationships between and among the American military, the Korean civilian population, and the Korean authorities--particularly the Korean police force. Limon, who retired after a twenty-year career in the Army, including ten years in Korea, clearly knows the territory and writes about it beautifully.

This is the seventh book in the series and one of the best. It opens when a Korean woman is viciously raped on a train in front of her small children. The people on the train identify the attacker as an American and, although the perpetrator was in civilian clothing, he is almost certainly a military man.

Sueno and Bascom are sent to meet the train and the passengers are all held on board until they arrive. Theoretically, it should have been impossible for the rapist to leave the train, but somehow he has managed to do so. The two detectives interview the other Americans on the train but glean precious few clues to lead them in the right direction.

Understandably, the Korean people are outraged by the attack and demand swift justice. But, as is often the case in these books, the biggest obstacle in the way of Sueno and Bascom's investigation is the Army itself. The last thing the Army wants is for a U.S. serviceman to be identified and convicted as the rapist. They'd rather massage the case into disappearing rather than face the bad publicity.

The Powers That Be, make it clear that they want Sueno and Bascom to conduct a cursory investigation and to help insure that they do, the Army assigns them to babysit a group of female country and western singers who are touring U.S. bases in Korea as part of a USO tour.

Sueno, who provides the brains for the team while Bascom provides the muscle, refuses to be deterred. He and Bascom are determined to provide justice for the victim, irrespective of what the consequences might be for the Army. Sueno also fears that if the rapist isn't caught, he could strike again.

Battling a clever criminal, a paucity of evidence and their own bureaucracy, the two investigators cover a great deal of South Korean ground in their pursuit of justice. As always, it's enormous fun to watch them work, and very educational as well. The book has a lot of twists and turns and a very satisfying climax. Mr. Kill should appeal to any reader who enjoys well-written crime fiction.
Posted by James L. Thane at 9:56 AM