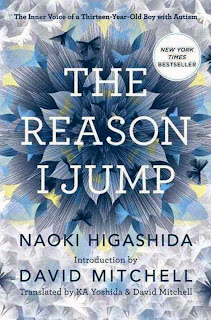 The Reason I Jump by Naoki Higashida,
Introduction by David Mitchell
2013 (English translation)
Reviewed by Diane K. M.
My Rating: 5 out of 5 stars

This is the most illuminating insight into the mind of an autistic child that I've seen. Naoki Higashida was born in 1992 and was diagnosed with autism when he was 5. One of his teachers designed an alphabet grid to help Naoki communicate his thoughts, which were then printed into a book in Japan in 2007.

The writer David Mitchell, who has an autistic son, found it and pushed to get an English translation published. In the introduction, Mitchell wrote that the book was "a revelatory godsend. Reading it felt as if, for the first time, our own son was talking to us about what was happening inside his head, through Naoki's words."

The book is structured in short sections, with Naoki responding to questions about common behaviors of autistic people. When asked why he repeats what others are saying, Naoki explains how difficult it is for an autistic person to communicate:

"It's quite a complicated process. First, I scan my memory to find an experience closest to what's happening now. When I've found a good close match, my next step is to try to recall what I said at that time. If I'm lucky, I hit upon a usable experience and all is well. If I'm not lucky, I get clobbered by the same sinking feeling I had originally, and I'm unable to answer the question being asked. No matter how hard I try to stop it, that weird voice slips out, making me more flustered and discouraged, and so it gets harder and harder to say anything ... I swear conversation is such hard work! To make myself understood, it's like I have to speak in an unknown foreign language, every minute of every day."

Naoki justifies why autistic people often avoid looking people in the eye when they're talking. "To me, making eye contact with someone I'm talking to feels a bit creepy, so I tend to avoid it ... You might well suppose that we're just looking down, or at the general background. But you'd be wrong. What we're actually looking at is the other person's voice. Voices may not be visible things, but we're trying to listen to the other person with all of our sense organs. When we're fully focused on working out what the heck it is you're saying, our sense of sight sort of zones out ... What's bothered me for a long time is this idea people have that so long as we're keeping eye contact while they're talking to us, that alone means we're taking in every word. Ha! If only that was all it took, my disability would have been cured a long, long time ago."

He also explains why it is that autistic people often find themselves alone, and then everyone assumes that they'd prefer being alone and don't like being around people. Naoki says that isn't true, but being isolated is often a consequence of autism. "I can't believe that anyone born as a human being really wants to be left all on their own, not really. No, for people with autism, what we're anxious about is that we're causing trouble for the rest of you, or even getting on your nerves. This is why it's hard for us to stay around other people. This is why we often end up being left on our own."

There are a lot more questions and answers with Naoki, and he also shares a few short stories he wrote. My biggest takeaways from this book are that autistic people are much more empathetic than the literature shows, and how hard they are working to try and control their bodies and their thoughts. "You can't always tell just by looking at people with autism, but we never really feel that our bodies are our own. They're always acting up and going outside our control. Stuck inside them, we're struggling so hard to make them do what we tell them."

It is telling that as soon as David Mitchell started doing publicity for this book (I saw him interviewed on "The Daily Show" and Jon Stewart raved about Naoki's insights) that "The Reason I Jumped" became an instant bestseller. Autism has affected so many families around the world, and many people are trying to understand it better. I think this book will help light the way.

I would highly recommend it to anyone who works with autistic people or who has a loved one who is on the spectrum.
Posted by DianeLibrarian at 7:00 AM