Middle of the Road Dystopian 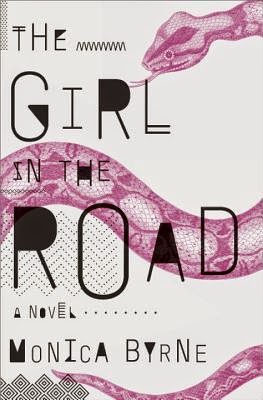 The Girl in the Road
by Monica Byrne
Published by Crown

Set in the not-too-distant future, The Girl in the Road focuses on the brutal journey of two women fleeing from violence in patriarchal cultures: Meena, a young woman from India, and Mariama, a girl enslaved in Africa. Told in alternating first person narratives, their stories converge by the end in not entirely surprising ways due to the symbolic overlap we see in each of their tales. Both have been attacked by snakes, both show signs of mental illness, both have suffered tremendous loss, both encounter words and images that have a spiritual significance to them alone, both are journeying toward a future they hope will be better.

In Mariama's story, she flees her home after finding a light blue snake in her bed. Heeding her mother's advice, she decides to flee and becomes a stowaway in a caravan transporting oil to Ethiopia. During this time, a beautiful woman named Yemaya joins the caravan and Mariama adopts her in her mind as a mother/lover/goddess figure. Born into a life of poverty and subservience, and bearing witness to her mother's repeated rape by their owner, Mariama is a surprisingly driven, courageous character, but her childlike naivete and bluntly sexualized view of the world are a dangerous combination in one so young.

In Meena's story, she awakens to find that a snake placed in her bed has bitten her; she immediately assumes someone is trying to kill her and flees India for Ethiopia, the place where her Indian parents were brutally murdered before her birth. She undertakes the dangerous journey across "The Trail," a bridge consisting of "scales" that runs from India to Djibouti. The bridge is intended to harvest wave energy and to cross it is an illegal, dangerous act. As Meena's trek goes on, she begins shedding that which is inessential and facing the truth from which her traumatized mind has been shielding her.

There is a lot to like about The Girl in the Road. The futuristic setting is at once recognizable and alien, but doesn't overshadow what is essentially an emotional and spiritual story about violence and healing. The world of Meena (which is set a few decades after the story of Mariama) is a racial, cultural, and sexual melting pot, and reading a book with characters from diverse backgrounds was a pleasure. Byrne's prose is lovely and minimalist, and her inclusion of Indian and Ethiopian cultures is seamless.

However, there was a lot that I did not enjoy. First off, the persistent phallic imagery, both the snakes in the bed and The Trail itself, is fraught with psychological and symbolic implications that had me expecting the big reveals in the end. I'm not a prude faulting an author's use of phallic imagery; rather, my complaint is that it lessened the suspense toward the novel's end because it seemed a little heavy handed. I was also disappointed that, in a novel that initially challenged the stereotypical view of transsexuals, it ultimately bolsters that stereotype.

And then there was THE SCENE, a scene that has apparently generated a lot of debate. **Since discussing the scene in question involves spoilers, I'll post it for interested parties in the comments section below.  Be forewarned.

I do want to make it clear that this scene is not responsible for my 2 star review. The disappointment I feel stems from the book blurbs leading me to believe that this is a sci-fi action/thriller. This is certainly a very different reading experience than the one I thought I signed up for. In addition to my misguided expectations, this is a novel of unlikable characters that engendered my sympathy, but not my empathy.
Posted by Amanda at 7:30 PM