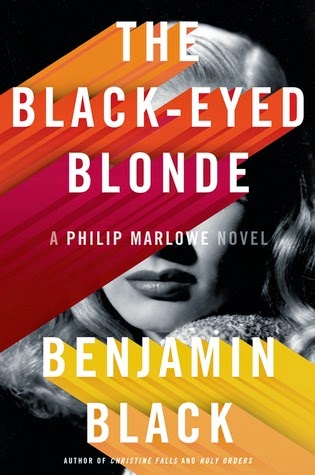 As a general rule, I avoid reading books in which a new author takes over an established character from another author who has died or retired. The whole idea of taking over someone else's series seems somehow wrong to me on a number of levels, and I've never read one yet in which I thought that the new author really did justice to the series or the characters.

Given that, I would have totally ignored this book in which Benjamin Black resurrects Raymond Chandler's Philip Marlowe who is, of course, one of the icons of crime fiction. But then a book club to which I belong chose the book and I had no choice in the matter.

I really wish they hadn't. I've read a couple of Black's novels featuring his own series character, Quirke, a pathologist in the 1950's Dublin morgue, and I've enjoyed them. Even so, I approached this book with more than a little trepidation, and reading it did nothing to allay the concerns I had going in.

The book is set in the early 1950s and opens with Marlowe sitting in his office. A beautiful, leggy and mysterious black-eyed blonde wanders in and asks Marlowe to find a missing "friend," named Nico Peterson. The blonde is a little vague about the details of her relationship with the missing Nico and about why she is so anxious to find him.

Marlowe and the reader both know that the woman is not giving him the whole story, but of course that's the way things go in P.I. novels like this. Marlowe takes the case, which naturally takes any number of strange twists and turns before finally coming to a conclusion. Black attempts to imitate Chandler's style, but succeeds only marginally. The fact of the matter is that there was only one Raymond Chandler and in the seventy-five years since Philip Marlowe first appeared in The Big Sleep, no one's come close to matching what Chandler did.

If I'd picked up this book knowing nothing about it, and if the main character had been named something other than Philip Marlowe, I would have thought that someone had made yet another fairly game effort to imitate Chandler but had fallen short like everyone else who has attempted to do so. And before writing this review, I sat down and re-read The Big Sleep, which I reviewed here in March, 2010. Doing so simply confirmed my impression that this homage pales against the original.

The Black-Eyed Blonde is not a bad book, and, for what it's worth, it's better than Poodle Springs, the novel that Chandler left unfinished and which was then completed by Robert B. Parker. But it's not nearly as good as a Philip Marlowe novel by Raymond Chandler and, for that matter, it's not as good as a Quirke novel by Benjamin Black. I'll eagerly look forward to reading another of the latter, but when it comes to Philip Marlowe, I'll be sticking to the real thing.
Posted by James L. Thane at 1:43 PM