Mnevermind 1: The Persistence of Memory 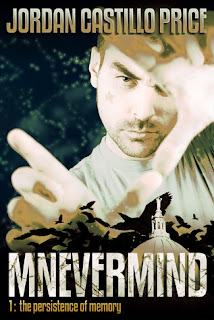 
While forgetting your problems won’t solve them, it does seem like it would make life a heck of a lot easier. Daniel thought so once. Now he knows better. He and Big Dan have always been close, which makes it all the more difficult to break the daily news: the last five years were nothing like his father remembers.


They’re both professionals in the memory field—they even run their own memory palace. So shouldn’t they be able to figure out a way to overwrite the persistent false memory that’s wreaking havoc on both of their lives? Daniel thought he was holding it together, but the situation seems to be sliding out of control. Now even his own equipment has turned against him, reminding him he hasn’t had a date in ages by taunting him with flashes of an elusive man in black that only he can see.


Is it some quirk of the circuitry, or is Daniel headed down the same path to fantasy-land as his old man?


45-year-old Daniel Schroeder and his father, Big Dan, own Adventuretech, a business that specializes in implanting fabricated memories based on a client’s needs. While the memories are temporary, the feelings of confidence, happiness, or inner peace that result are lasting.


Daniel developed Life is Awesome, a mnem intended to make his business rich. Instead, the mnem has altered his father’s past, seemingly permanently. And just who is that hot guy in black who keeps popping up in Daniel’s own mnems?


I liked Daniel a lot and appreciated his struggles as he works a part-time job to help keep his business afloat and maintains a close relationship with his family, particularly his father, who believes that he and Daniel’s mom are still together.


I also loved the way memories and actual experiences flowed and overlapped to a point where it was often difficult to tell which was which.


Some mysteries are solved, but there are lots of loose ends and the conclusion is a bit too untidy for my liking.


I’m happy to say the story met all my expectations, and I very much look forward to the next installment!
Posted by Nancy at 7:46 AM