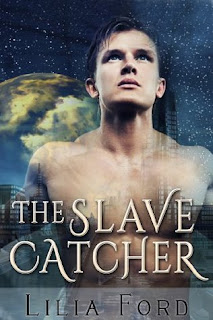 Star City, best known for its brothels and casinos, is one of the few planets in the quadrant that outlaws slavery—for everyone, that is, except the galaxy bullies, the Borathians. Telepaths and recent conquerors of a backwards planet named Earth, the Borathians are simply too powerful to refuse. A special treaty allows them to bring their pleasure slaves or “bonds” onto the planet, and if one escapes, they have five days to recover him.

Sam Beron, private locator, may have been born on a Maradi space cruiser, but Star City is his home now and he’d say he despises slavery as much as any native. Unfortunately, a run of bad luck at the casino tables leaves him flat broke and scavenging expired military rations out of a neighboring dumpster. Next thing he knows, the Borathians are offering him a fortune to track down one of their escaped bonds, a beautiful Earth boy named Liam. What's a hungry locator to do?

Through the eyes of Sam Beron, private locator, the reader gets a glimpse of life on the hedonistic planet, Star City. The story started off a little sluggishly, but I grew to love Sam’s musings on life, pleasure, family, sex, Earthish culture, and those intrusive Borathians who won’t stay out of his mind.

“The moment he looked at me, I couldn’t look away. I could feel his telepathic powers flooding my brain, like there wasn’t a single part of my thoughts he couldn’t see as easily as I could see his clothing. If you’d been there, you’d recognize that it wouldn’t have taken more than a thought for him to destroy my mind – or control me until I had no more independent will than a cleaning droid.”


Because Sam chose to live planetside, he was cast out from his family, a race that leads a nomadic existence cruising around the galaxy. While there are no prohibitions on worldly pleasures, slavery is outlawed for all but the telepathic Borathians, who are allowed to bring their human “bonds.” Because Sam is bad at gambling, he is forced to accept a job recovering a Borathian’s escaped bond even though he finds the idea of slavery abhorrent.

I liked this story a lot. It was wry and sexy, packing an emotional wallop as Sam reveals the soft center under his crispy exterior.

I expected a romance and got so much more.
Posted by Nancy at 3:48 PM