THE VENICE TRAIN BY GEORGES SIMENON

Venice Train by Georges Simenon
My rating: 4 of 5 stars

”Was Calmar himself happy? Not just since Venice and the ridiculous episode on the train--but before? He never asked himself the question, or hardly ever, and when he did he quickly thought about something else.” 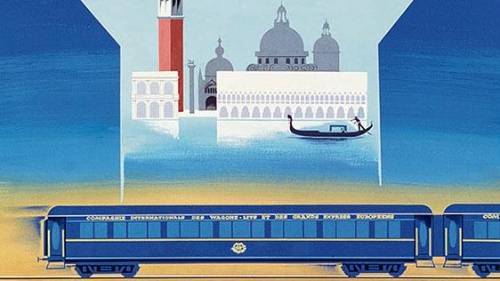 Justan Calmar is called back from vacation a few days early by his boss. He catches the train in Venice to go back to Paris and waves goodbye to his family. These prove to be the last few minutes that Calmar is the man that everyone has grown accustomed to him being.

Stable, corpulent, not overly ambitious, but he works hard enough to earn a good living for his family. He doesn’t really think about it, but his life is constricted down to a simple maze of traveling between his home and work with few, if ever, brief forays along the way. There is nothing remarkable about him, and if he were to suddenly do something remarkable or even do something differently than he always has, it would be a stunning revelation to those who know him. They would be made uneasy.

So the interest the man on the train takes in the most intimate details of his life is decidedly odd. ”Little by little, by asking one harmless question after another, the man had obtained a quantity of information about his life, his family, and his job, which he had supplied with a docility that made him feel slightly ashamed.” Certainly, Calmar would be amazed at the most intimate details people will share about their lives on a public forum, like Twitter, Snapchat, or Facebook. The man makes him uncomfortable, but for all that, when the man suggests he run an errand for him in Lausanne, Calmar readily agrees. I have visions of Strangers on the Train running through my head at this point.

He is supposed to pick up a suitcase from a locker at the station and deliver it to a woman at a specific address. Easy enough, except for what he finds when he arrives. ”At the foot of a pale-blue couch, he saw a pair of shoes, two legs, a petticoat, and then, finally, the neck and reddish hair of a woman. She was lying full length on a carpet of a darker blue than the couch, one arm stretched out, the other folded behind her back, as though it had been twisted.”

Really Georges Simenon and Alfred Hitchcock would have gotten along superbly. Simenon wrote suspenseful novels that would have translated well to make Hitchcock type films. There is story that sounds so vintage Hitchcock I want to believe it is true. ”Alfred Hitchcock was said to have telephoned, only to be told by Simenon's secretary that he couldn't be disturbed because he had just begun a new novel. Hitchcock, knowing that Simenon was capable of writing one novel -- or two or three -- every month, replied, 'That's all right, I'll wait.'”

What Calmar finds in the case will have a profound impact on his life. It is certainly one of those situations, if I were reading this with a book club, where the morality of the situation could be discussed at length. What would you do? Calmar does not handle the stress of the situation very well. ”Some weeks were painful, agonizing, in the office and at home. Sitting at the dinner table, he would suddenly feel his forehead bathed in sweat, his nerves knotted, a sense of constriction in his chest; at moments like these, he couldn’t bear to have anyone look at him.”

The problem of course is that he feels guilty. He feels like he has done something wrong. His shame for his actions, he is convinced, is etched on his face. His behavior becomes erratic by Calmar standards. He might even stop and have a beer on his way home from work. OMG! His wife, used to the steady Eddie she married, begins to give him the third degree about everything he does that doesn’t fit his standard pattern. He can’t hardly stand it. Lies grow upon other lies, and the question is, can Calmar find a solution to his problems before he cracks up.

This is a vintage Simenon. The plot is compelling, and the ending is superb. A Georges Simenon book or two always finds their way into my luggage when I travel. His stories make for perfect travel companions. They are concise, twisty mysteries with literary nuances that never fail to please.

Posted by JEFFREYKEETEN at 12:19 PM