A Memoir for Dratch Fans

Girl Walks into a Bar . . .: Comedy Calamities, Dating Disasters, and a Midlife Miracle by Rachel Dratch
Reviewed by Jason Koivu
My rating: 4 of 5 stars

I can understand why Rachel Dratch isn't beloved by the masses and getting lead roles in blockbuster rom-coms. I get that. But the woman tickles my funnybone and that's all that matters to me!

Perhaps it's partly that we're both from Massachusetts and I can't help but root for a hometown gal, but really what I really love is her off-beat humor and those out-of-left-field characters she's known for. 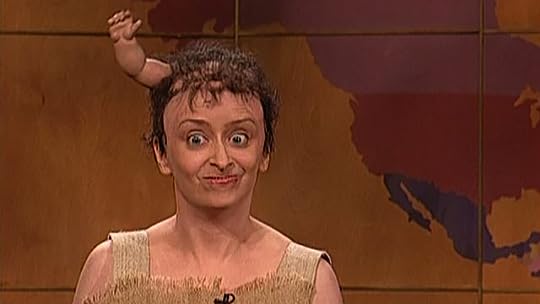 Qrplt*xk, the mutant offspring of Angelina Jolie and her brother

If you're not a Dratch fan why are you here? This is not the book for you. If you're hoping for some SNL insights, yeah, you'll get some in Girl Walks into a Bar, but they're limited to her experiences on the show and she doesn't do a lot of dirt-dishing. She is great at framing a story and she's got plenty of showbiz tales to tell. The first third of the book is about her journey up to SNL and the "What happened with 30 Rock?" aftermath. That is topnotch, fun stuff! Very well-written and performed on the audiobook.

The later two-thirds take on a much more personal tone and the subject matter veers off on another course. I'm being vague as not to spoil the content for potential readers. Suffice to say, if you're a Dratch fan, this second movement of the autobio should retain your interest. If you're not a fan, it'll probably be hit-or-miss whether or not you're interested in the specific topic(s) she dwells upon. I'll go so far as to say it's heavily relationship related.

The wife and I listened to this over the course of three long car rides and we enjoyed it so much we were actually looking forward to jumping back in the car asap!