Salem's Lot by Stephen King
My rating: 5 of 5 stars 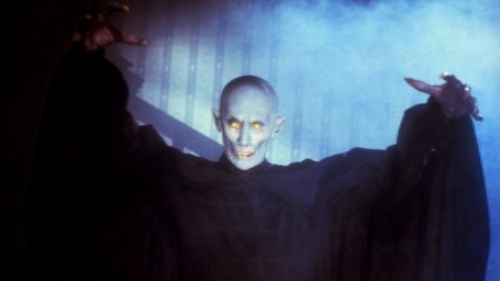 From the 1979 movie version of Salem’s Lot

”It would be years before I would hear Alfred Bester’s axiom ‘the book is the boss,’ but I didn’t need to; I learned it for myself writing the novel that eventually became Salem’s Lot. Of course, the writer can impose control; it’s just a really shitty idea. Writing controlled fiction is called ‘plotting.’ Buckling your seatbelt and letting the story take over, however...that is called ‘storytelling.’ Storytelling is as natural as breathing; plotting is the literary version of artificial respiration.”

This nugget of wisdom is shared by Stephen King in the introduction to the 2005 illustrated edition of Salem’s Lot. I have to say that I completely agree with this philosophy. I have talked to many would-be writers who are so bogged down in getting the outline of their story completely figured out that they never actually get to the writing part of the process. I like having a few concepts in my head before I start whacking away at that mesmerizing whiteness of the blank page, but if I have it all figured out,...then why write it? The fun part is discovering the nuances of the maze before I find the exit.

Stephen King grew up in a small town in New England, and it seems like he has been waging war on small towns every since. ”There’s little good in sedentary small towns. Mostly indifference spiced with an occasional vapid evil--or worse, a conscious one. I believe Thomas Wolfe wrote about seven pounds of literature about that.” I, too, grew up in a small town and fully intend, in the scope of my writing, to eviscerate some of the more heinous aspects of small town “values.”

I love Paul Bettany’s line from the movie Knight’s Tale. Chaucer: “I will eviscerate you in fiction. Every pimple, every character flaw. I was naked for a day; you will be naked for eternity.” I always like to say that my career is littered with the corpses of my enemies.(Hyperbole) Just a word of warning for those still breathing: I will reveal you for the bloody bastards/bitches you are in my fiction. If you think it isn’t you...it probably is. #evillaughwahaha

Jerusalem’s Lot is that typical small town that King loves to destroy on a regular basis, and this time his weapon is...vampires. The Marsten House, the scene of unspeakable tragedies, has been left empty for many years. It is a grand mansion falling into ruin by the very evilness that seems to fester in the walls and the rafters clear down to the bedrock. Ben Mears has come back to town to write about the place and intends to actually stay on the premises, but learns on his arrival that the house has been sold. Who would really want to stay there anyway? ”The house smelled. You wouldn’t believe how it smelled. Mildew and upholstery rot and a kind of rancid smell like butter that had gone over. And living things--rats or woodchucks or whatever else that had been nesting in the walls or hibernating in the cellar. A yellow, wet smell.”

The Marsten House is the perfect place for a vampire named Barlow and his assistant R. T. Straker to take up residence. The first clue should have been the initials; remember Dracula’s assistant...R. M. Renfield. The one word name as well...Barlow…. What does he think—he is Prince?

Yes, he does, and much, much more. He is, ultimately, a God fashioning people in his own image.

As Barlow picks off the residents of Jerusalem's Lot one by one and turns them into an army of hungry vampires, a small band of misfits start to fight back. After all, who else, but the freaks and oddballs would believe that there really are vampires? ”An old teacher half-cracked with books, a writer obsessed with his childhood nightmares, a little boy who has taken a postgraduate course in vampire lore from the films and the modern penny-dreadfuls.”

Barlow has certainly had better men and women than these who have tried to destroy him. He has become overconfident and underestimates the courage and resolve of this disenfranchised band of eccentrics he is dealing with. Check out this condescending speech he lays on Ben Mears:

”Look and see me, puny man. Look upon Barlow, who has passed the centuries as you have passed hours before a fireplace with a book. Look and see the great creature of the night whom you would slay with your miserable little stick. Look upon me, scribbler. I have written in human lives, and blood has been my ink. Look upon me and despair!”

No one is more shocked than Stephen King that his idea for a vampire hoard destroying one of his loathed small towns turns into an inspiring, uplifting novel of the weak fighting back against the most powerful. It is a slow burn of a plot. King uses the early pages of the novel to let us get to know these people before we see them tested beyond normal human endurance. Fortunately, his working title of Second Coming was vetoed for the published title by his wife Tabitha who, rightly so, decided it would be a better title for a sex manual. It is a nice ode to the classic vampire myth and manages to add some original stake splattering moments to the genre. Salem’s Lot has become a classic of fanged literature. King proves his storytelling chops.

Posted by JEFFREYKEETEN at 12:44 PM