Mapping Fate: A Memoir of Family, Risk, and Genetic Research 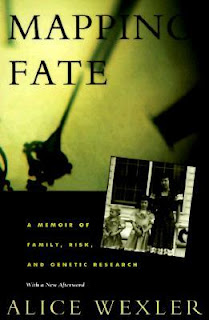 
In Mapping Fate, Alice Wexler tells the story of a family at risk for a hereditary, incurable, fatal disorder: Huntington's disease, once called Huntington's chorea. That her mother died of the disease, that her own chance of inheriting it was fifty-fifty, that her sister and father directed much of the extraordinary biomedical research to find the gene and a cure, make Wexler's story both astonishingly intimate and scientifically compelling.

Alice Wexler's graceful and eloquent account goes beyond the specifics of Huntington's disease to explore the dynamics of family secrets, of living at risk, and the drama and limits of biomedical research. Mapping Fate will be a touchstone for anyone with questions about genetic illness and the possibilities and perils of genetic testing.

“The ambiguous condition of 50% risk is extremely difficult to maintain in one’s mind, if not impossible. In practice, a 50-50 risk translates to a 100% certainty that one will or will not develop the disease.”
― Nancy Wexler, Genetic Russian Roulette

Before reading this book, I was aware that singer-songwriter Woody Guthrie died of Huntington’s disease in 1967. What I didn’t realize until after I read this book was how cruel this disease is. Symptoms usually develop between 30 and 50 years of age. In the early stages, patients may experience mild cognitive symptoms and psychiatric changes. Later on, they experience chorea, or abnormal involuntary movements, in different areas of the body. In later stages of the disease, individuals may have difficulty walking, speaking, and swallowing. Pneumonia and heart disease are the leading causes of death for people with Huntington’s disease.

This scientific memoir is utterly fascinating, despite the fact that some of the science went over my head. Still, I feel that Alice Wexler did an admirable job writing a compelling story about family, living with the risk of disease, and the innovation and efforts by her father, her sister, Nancy, and the scientific community that led to the discovery of a genetic marker for Huntington’s in 1983.

Alice’s mother, Leonore Sabin, was 53 in 1968 when she was diagnosed with the disease. Her father and three brothers had already died. Her husband, Milton, started the Hereditary Disease Foundation, and dedicated his efforts to inspiring researchers and caring for his sick ex-wife.

Nancy’s work with the foundation took her to the fishing villages near Lake Maracaibo in Venezuela, where about 1 in 10 people have Huntington’s disease.

Despite the grim subject matter, I found this very hopeful and optimistic. Even though there is still no cure for Huntington’s disease, there are drugs that can help alleviate certain symptoms and the option for those at risk to undergo genetic testing to find out whether they will develop HD in the future.
Posted by Nancy at 5:16 PM